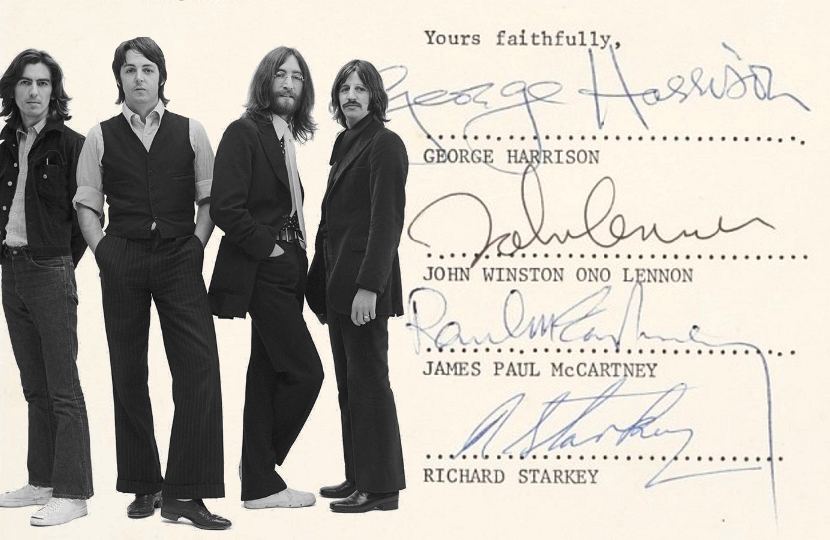 A copy of the contract which finally broke up The Beatles is expected to sell for $50,000 when it hits the block at Sotheby’s next week.

The contract, signed by all four band members in 1974, officially dissolved the band’s Apple Corps Ltd business and broke the last legal ties that were binding them together.

The historic document will be offered with an estimate of $30,000 – $50,000 at Sotheby’s online sale of Fine Books and Manuscripts, which concludes on December 17.

The Beatles had ceased to be a functioning band back in 1969, following years of growing animosity and creative differences.

Lennon privately told the band he was leaving in September 1969, but it wasn’t until April 1970, when McCartney announced he was leaving, that the news went public.

However, the Fab Four were still bound together by their numerous business interests, which it would take another four years of litigation to untangle.

The 1974 contract was the final nail in the coffin of the group, as they agreed to divide their earnings and rid themselves of the company they had founded together in January 1968.

The meeting was set for December 19 at the Plaza Hotel in Manhattan, where the band had stayed during their first trip to the United States.

Paul McCartney and George Harrison flew out to New York, and Ringo spoke to them over the phone from his home in England, having already signed the papers.

But despite living within walking distance, Lennon declined to meet his former band mates at the hotel to sign the contract, reportedly claiming “the stars aren’t right” – but he was simply putting off the inevitable.

Ten days later, whilst on holiday at Disneyworld with his son Julian and his then-partner May Pang, a lawyer finally caught up with him and handed him the decisive document.

“The friendship was still there. They were brothers. There was no animosity. And even though they all felt they had to break up to get to the next level of their musical careers, John had started this band that changed the world … So, when he sat down to sign, he knew that this was it. His was the last signature. As he had started the group, he was the one to end it.”

Having begun at a church fete in Liverpool on July 6, 1957, the Beatles story ended on December 29 in a hotel room at Disney’s Polynesian Village Resort.