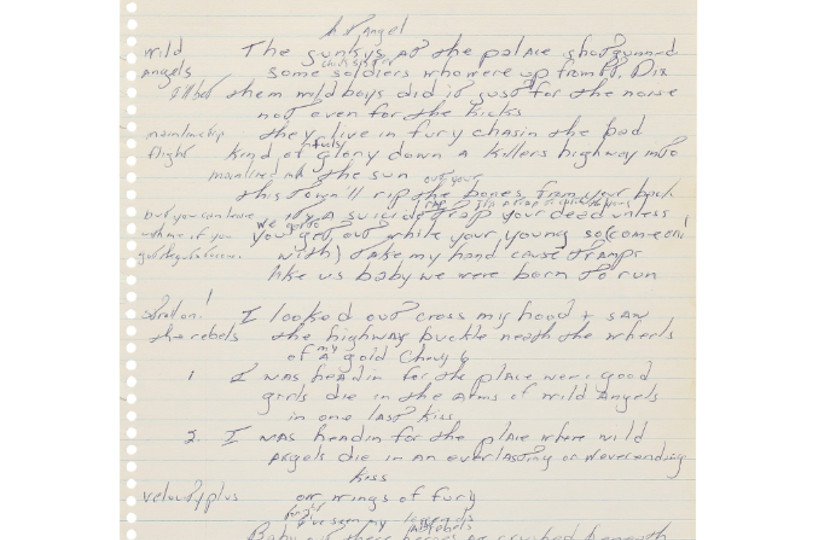 Bruce Springsteen’s original lyrics to his breakout hit Born to Run (1975) realised $250,000 in an online auction at Sotheby’s that closed on June 28.

Born to Run was a last ditch attempt at stardom for Springsteen. While he was a well known performer throughout his native New Jersey, he’d never really broken out beyond the state borders.

Springsteen spent around six months writing the song, obsessively tweaking it to ensure every aspect was perfect. That’s six months out of the 14 months he spent on the album.

The hard work paid off. Born to Run charted at a peak position of #3 in the Billboard album charts and Springsteen became a superstar practically overnight.

This handwritten manuscript is one of countless drafts Springsteen made and clearly dates to early on in the pricess.

Sotheby’s comments: “Although Springsteen is known to have an intensive drafting process, few manuscripts of ‘Born to Run’ are available, with the present example being one of only two identified that include the most famous lines in the song.

“This iteration expresses the darkness that the early versions are known for, but has the distinction of a nearly perfected chorus.”

“The majority of the lines are apparently unpublished and unrecorded, but Springsteen reworked many of them to produce what would become the recorded version.

“The imagery and tone are constant from the present manuscript to the final song.”

Born to Run remains the highlight of Springsteen’s live show, still as incendiary today as it was back in the early 1970s. In many ways it’s the track that defines his work. In its celebration of hot rods, highways and working class lives it has become a bona fide American anthem.