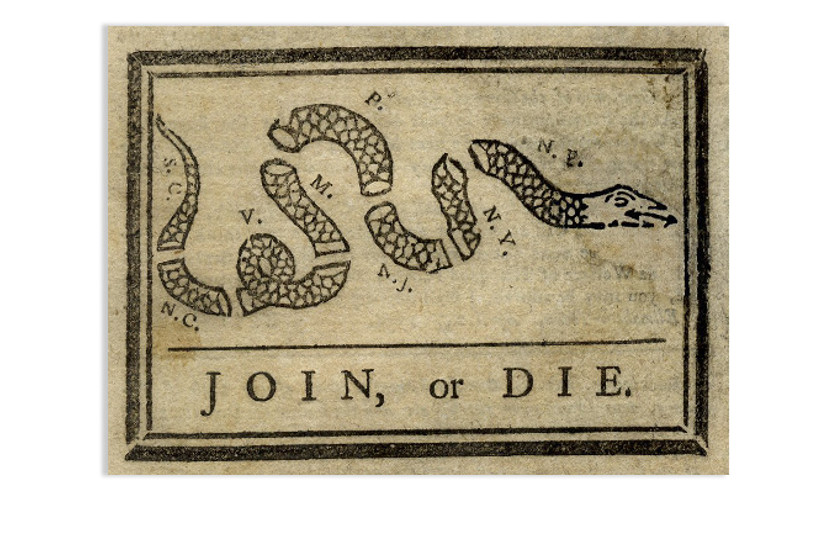 'Join, or Die' is one of the most influential political cartoon of all time (Image: Nate D Sanders)

This was the first printing of this hugely important political cartoon.  The lot offered here is of two original surviving copies of this newspaper and the only one left in private hands. The other can be found in the Library of Congress. This specimen will be offered with a starting bid of $40,000.

Published on May 9, 1754, “JOIN, or DIE” was an expression of Franklin’s frustration at the lack of unity between America’s first colonies during the French and Indian War (1754-1763). At the time they were fighting pitched battles against both the French and Native Americans over land to the west of the Appalachian Mountains.

The war had been going badly for the colonists, in part due to the difficulty in coordinating military actions between competing jurisdictions. Franklin was an enthusiastic proponent of the Albany Plan, a proposition to unite America’s 13 colonies under one local government.

Understandably, the British were nervy about this idea. The Albany plan was never enacted, which ultimately led to the establishment of the independence movement.

The timber rattlesnake shown in the cartoon is cut into eight labelled segments, each of which represents a colony (or grouping of colonies).

The cartoon was co-opted by the independence movement in 1765 as a rallying symbol and republished widely in newspapers across the eastern seaboard. Paul Revere put it as the masthead of his Massachusetts Spy that year.

That a rattlesnake was chosen was no mere afterthought. Franklin wrote (under a pseudonym) in 1775: ”…she has no eye-lids-She may therefore be esteemed an emblem of vigilance.-

“She never begins an attack, nor, when once engaged, ever surrenders…to those who are unacquainted with her, she appears to be a most defenseless animal; and even when those weapons are shown and extended for her defense, they appear weak and contemptible; but their wounds however small, are decisive and fatal:-Conscious of this, she never wounds till she has generously given notice, even to her enemy, and cautioned him against the danger of stepping on her.-

“Was I wrong, Sir, in thinking this a strong picture of the temper and conduct of America?”

Christopher Gadsden furthered the metaphor in 1775, with his electric yellow “Don’t Tread on Me” flag. The design displays a coiled rattlesnake and was adopted as a motto flag by the US Continental Marines.

It’s difficult to put a price on such a key piece of US history, but given the phenomenal rarity of this lot it’s entirely plausible it will reach a sum in the high six figures.  In 2009, a rare 1773 edition of Franklin’s Poor Richard’s Almanac sold for $556,500. 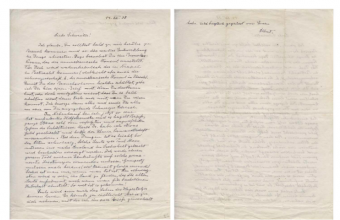