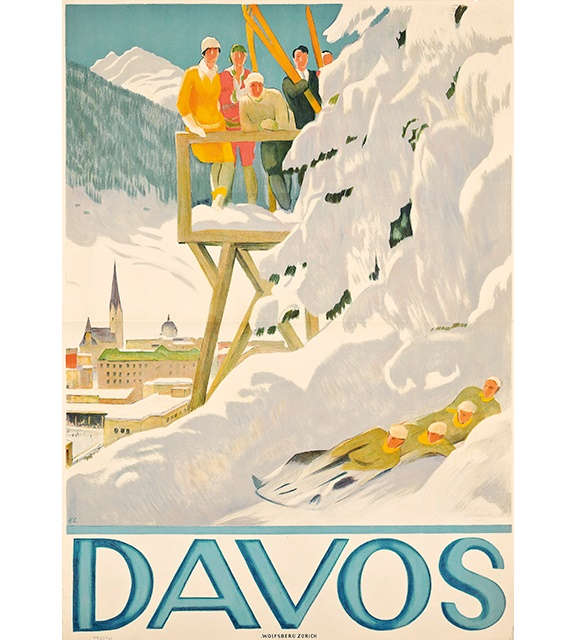 Rare vintage posters from one of the world’s most important private collections will be sold at Christie’s in London next month.
The Dr Hans Sachs Collection features posters from throughout Europe and the U.S during the first third of the 20th century, with estimates ranging from £800 through to £18,000.

The selection of posters on offer advertising everything from travel destinations and winter sports to cars, champagne, chocolate and tobacco, with artwork by many of the era’s most influential graphic artists.

"In the early 20th century many news products and services were introduced to the public by the poster and this group provides a window into society and leisure at that time. Many of the posters in the collection have rarely been seen at auction, such as the examples from the Vienna Secession artists Egon Schiele, Alfred Roller and Koloman Moser. The sale will offer collectors the opportunity to own both a piece of poster history and an artwork from this seminal collection."

Sachs, a Jewish dentist from Berlin, assembled what was then the world’s biggest poster collection, and was instrumental in developing the hobby, organizing the first poster collecting society and publishing Das Plakat (The Poster), a magazine popular with fellow collectors around the world.

However, in November 1938, on a fateful night forever remembered as ‘Kristallnacht’, Sachs was arrested and imprisoned as Nazis across Germany attacked Jewish homes, schools and businesses burned down synagogues and killed close to 100 Jews.

Sachs was eventually released, and was able to flee to America with his family, but his poster collection was confiscated by the Gestapo and believed destroyed. However, in 2005 his descendents discovered that the collection had in fact been preserved for more than half a century in the vaults of the Deutsches Historisches Museum (DHM) in Berlin.

His family immediately launched a legal battle to restitute the posters, and in 2012 they were finally returned to their rightful owners.

Now 100 posters from the collection will be offered for sale for the very first time at Christie’s, as part of the Interiors sale in London on June 8.