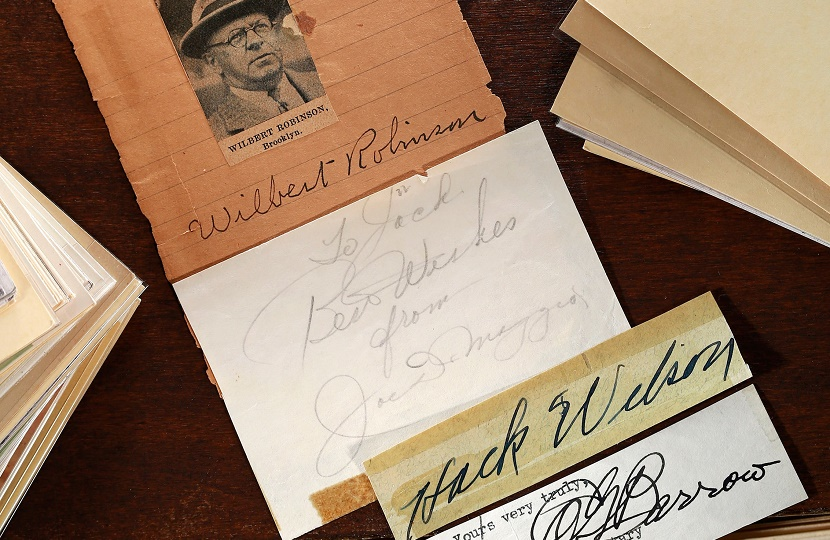 One of the world’s greatest collections of baseball autographs is expected to fetch more than $200,000 when it hits the block at Heritage Auctions next week.
The Jack Smalling Collection features over 13,000 signatures, and will be offered as a single lot as part of the company’s Sports Memorabilia Catalog Auction in Dallas on May 17-18.

Smalling is regarded as one of the most significant figures in the entire sports collecting hobby, thanks to his seminal book ‘The Baseball Autograph Collector’s Handbook’.

First published in the 1980s, the book features the contact addresses of baseball stars past and present, and is now in its 19th edition.

The book has served as an invaluable resource for generations of collectors seeking baseball autographs through the mail – the method by which Smalling assembled his own personal collection.

He spent decades tracking down players, from legends of the ‘Dead Ball’ era and pioneering Negro League stars to today’s modern MLB heroes.

According to Heritage Auctions, “many, if not most, of Smalling’s greatest successes came from trails long since gone cold, but when Smalling first took up his hobby in 1962, quite a few Dead Ball Era legends still walked the Earth, and if not the players themselves, then their children or grandchildren, pleased in that pre-Internet age that somewhere, someone still remembered the man.”

The vast majority of Smalling’s signatures exist on 3×5″ index cards, painstakingly catalogued by the debut year of each player.

In the case of deceased players, Smalling discovered that many of their descendents were happy to send him an old signature clipped from a letter, an official document or a personal cheque.

Remarkably, the 13,000+ signatures offered at Heritage represent only a small portion of Smalling’s overall collection.

But the selection contains the ‘best of the best’, and many of the signatures contained within are so rare that there are less than 10 known examples in existence – in some cases far less.

The scope and breadth of signatures make the collection worthy of any baseball museum in the world; and it stands as a testament to Smalling’s passion and dedication, as a contribution to the hobby as important as those made by the names on his index cards.