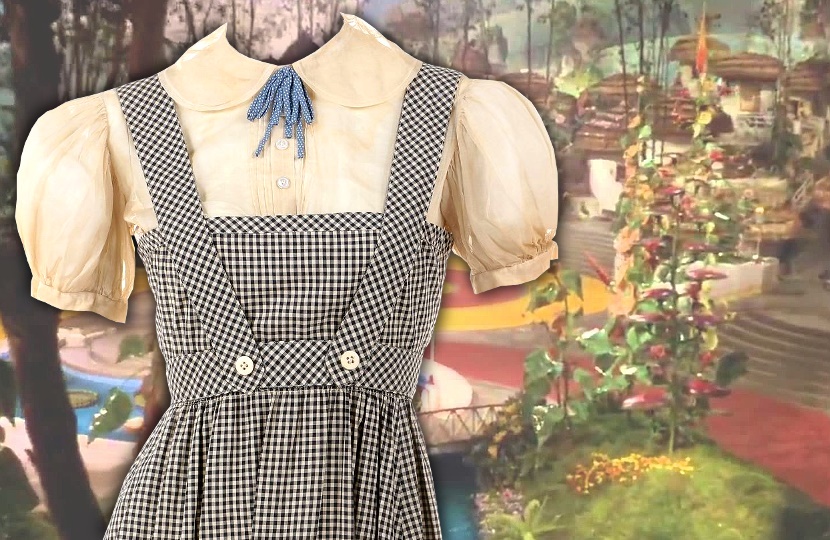 An iconic Dorothy dress from the Wizard of Oz could fetch up to half a million dollars when it hits the auction block in California later this month.

The dress appears on-screen in one of cinema’s most magical moments, as Dorothy Gale steps out from her sepia-toned cabin into the Technicolor world of Oz.

The transition remains one of the most famous scenes in movie history, and the dress was a vital part of achieving the effect.

Numerous versions of Garland’s pinafore dress were worn during the production, but only one was made using black and white fabric, rather than the standard blue and white.

The unique dress will now hit the auction block as part of Profiles in History’s ‘Icons & Legends of Hollywood’ sale, which takes place on September 25-26.

Although The Wizard of Oz wasn’t the first live action film to feature the three-strip Technicolor process, it was the first to use it to remarkable effect.

In L. Frank Baum’s original Oz books, Dorothy’s home of the Kansas prairie is described as a barren, monochromatic landscape – in stark contrast to the colourful fantasy world of Oz.

Today the transition between the two worlds would be easily achieved using CGI, but back in 1939 the pivotal moment offered a tricky challenge to the crew.

Initially producers had planned to film the scene in Technicolor, then hand-tint every individual frame back to black and white before gradually allowing the colors to come through as Dorothy stepped out of the door.

However, the process proved far too expensive and labour intensive and a more cost-effective solution was needed for the transition.

During reshoots, the production team came up with the ingenious idea of simply painting the inside of the cabin to match the sepia tones of the early scenes.

When Dorothy lands in Oz, the figure that first opens the door is in fact Judy Garland’s body double Barbara Koshay, wearing the unique black and white version of Dorothy’s gingham dress, and with her skin tone tinted using make-up.

As the camera travels out into the fantasy world of Munchkinland, Koshay drops out of shot for a moment, and is swiftly replaced by Garland who walks out wearing her blue and white dress into the riot of color.

The transition is seamless, and retains its power eighty years after it first wowed audiences in movie theatres around the world.

Memorabilia from the Wizard of Oz is amongst the most valuable and sought-after amongst collectors of classic movie history.

And although the dress offered at Profiles in History wasn’t worn onscreen by Judy Garland herself, the significant role it played in the film’s production is likely to attract serious bidders.