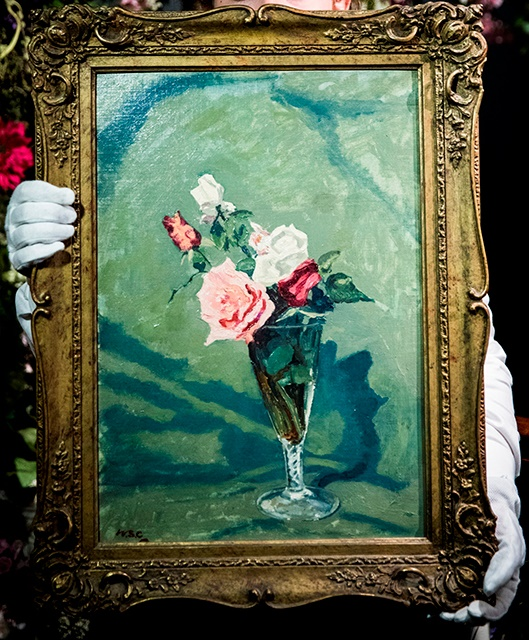 A painting which marked the close friendship between Winston Churchill and Vivien Leigh will be sold at Sotheby’s later this year.
The still-life of roses was painted by Churchill in 1951, and gifted to Leigh during a dinner celebrating the birthday of her husband, Laurence Olivier.

Churchill was known to reserve his flower paintings to those closest to him, and Leigh reportedly hung the work opposite her bed for decades.

The painting remained hidden for more than 65 years, and will now be revealed to the public for the very first time, prior to an auction of Leigh’s private collection in London on September 26.

Churchill and Leigh first met back in 1936, when they were introduced on the set of Fire Over England by British film producer Alexander Korda, and began a friendship which would last until Churchill’s death in 1965.

Whilst serving as Britain’s wartime Prime Minister in 1940, Churchill arranged a screening of Leigh’s Oscar-winning Gone with the Wind, and he later proclaimed that her 1941 film That Hamilton Woman, about the life of Lord Nelson’s mistress Emma Hamilton, was his favourite film of all time.

Along with the painting, the sale of Leigh’s collection will also feature several other items which tell the story of their friendship.

These include an inscribed copy of Churchill’s book ‘Painting as a Pastime’, which he also gifted to the actress and inspired her to pick up a brush herself, estimated at £1,500 – £2,000; and a letter from Churchill to Leigh in 1957, in which he promised to help her save St James’s Theatre by secretly donating money to the restoration project, estimated at £2,000 – £3,000.

"Churchill’s gift of a still life of roses to Vivien speaks volumes about the respect and regard he felt for her," said Frances Christie, Head of Sotheby’s Modern & Post-War British Art Department.

"Theirs was not a passing acquaintance, but a friendship that endured for more than twenty years. He inspired her to begin painting and it is poignant to think that they shared a mutual solace in an activity where they found a refuge from all the trials and tribulations of daily life."