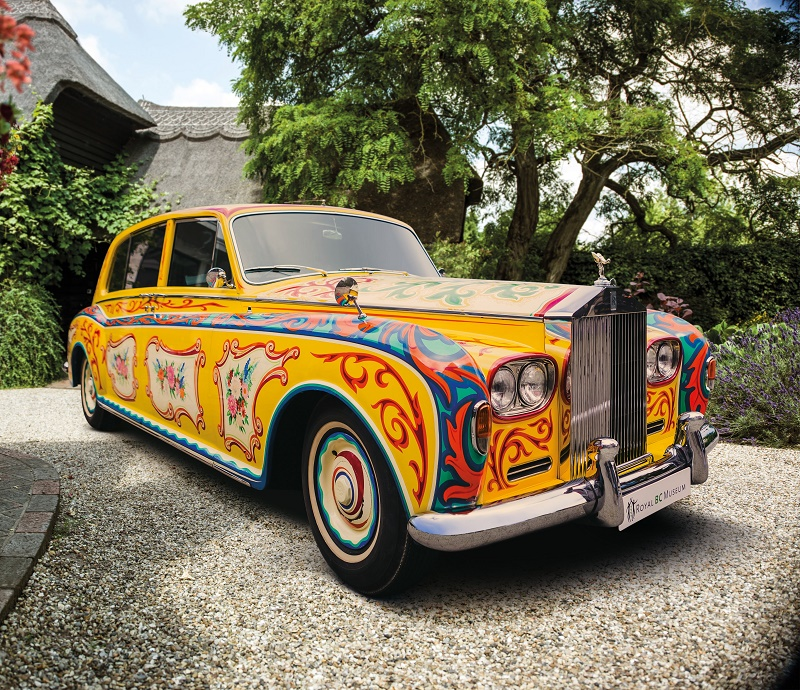 John Lennon’s iconic, psychedelic Rolls-Royce is returning to London this summer, as part of an exhibition at Bonhams.
The hand-painted Rolls-Royce Phantom V will star in ‘The Great Eight Phantoms’, which celebrates the history of the classic British car with eight of the most famous examples ever produced.

The exhibition will run at Bonhams’ Bond Street showroom from July 29 until August 2, and also includes a 1927 Rolls-Royce Phantom I Towncar owned by Fred Astair, and a 1933 Rolls-Royce 40/50hp Phantom II Continental Touring Saloon which belonged to Captain Sir Malcolm Campbell.

On June 3, 1965, John Lennon first took delivery of a new customised Rolls-Royce Phantom V, finished in matt black, which included a television, a telephone, a record player and sound system, and a back seat which turned into a bed.

However, the Beatle was soon bored of the original colour, and decided to spruce it up a bit, claiming that he had always wanted to be "an eccentric millionaire".

Depending on who you believe, Lennon was either inspired by a caravan in his garden; Ringo as they drove past a travelling funfair; or a Dutch art collective known as ‘The Fool’.

Either way, in 1967 he decided to have the car repainted in a colourful gypsy style, which proved perfect for the psychedelic ‘Summer of Love’ that was just around the corner.

He sent the car to coachbuilders JP Humbert, who in turn employed commercial artist Steve Weaver to design and repaint the Rolls Royce.

The result was perhaps the most famous ‘rock star car’ in the world – a design which, according to legend, inspired an old lady to attack Lennon with an umbrella, shouting "You swine! How dare you do that to a Rolls-Royce!"

The car quickly became the Beatles’ favoured mode of transport, but when the band split up in 1970 Lennon took it with him to New York, and loaned it out to his rock star friends including The Rolling Stones, Bob Dylan and The Moody Blues.

In 1978 Lennon donated the car to the Cooper-Hewitt Museum in New York, and in 1985 it was sold at Sotheby’s to Canadian millionaire Jim Pattison for $2.3 million – then a record price for any car at auction.

Pattinson later donated the car to the Royal B.C. Museum in Victoria, Canada, and for more than 30 years it has remained as one of the museum’s most treasured exhibits.
However, due to the highly fragile nature of the paintwork, the car is rarely on display to the public, and the museum has faced a constant conservation battle to keep it safely in storage.

The upcoming exhibition in London offers fans a once-in-a-generation opportunity to see the most famous automobile in music.