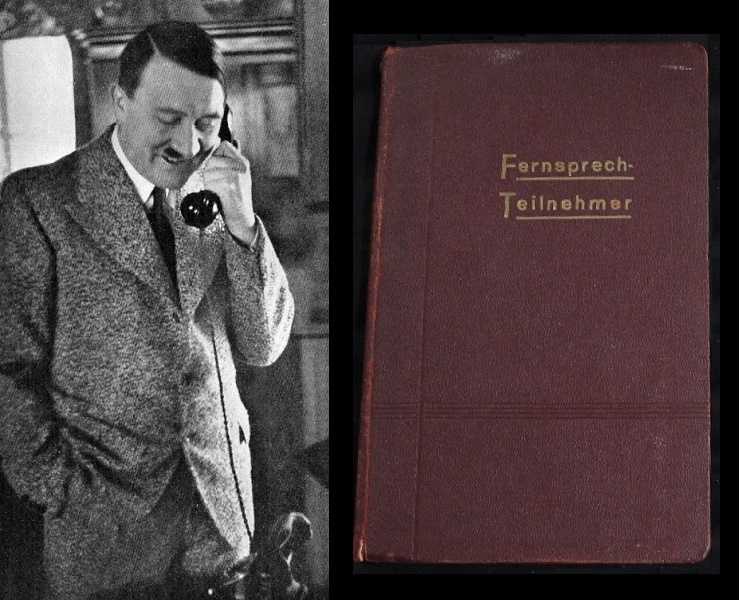 A telephone book believed to have belonged to Adolf Hitler is up for auction in the U.K this week.
The leather-bound book was discovered by British officer Captain John Hodge at the end of WWII, amongst the rubble of the Reich Chancellery in Berlin.

The only notable name missing from the pages is that of Hitler himself – leading experts to believe the directory belonged to him.

To back up this theory, the book contains contact numbers for Hitler’s photographer Heinrich Hoffman, who first introduced him to Eva Braun; his personal pilot Hans Baur; his financial advisors Dietrich von Jagow and Wilhelm Keppler; and the direct line to Hitler’s bodyguard division.

Also tucked between the pages is a letter from Goebbles’ Private Secretary, which was inside the book when it was discovered.

Captain Hodge was one of the first British soldiers to reach Berlin at the end of the war in the summer of 1945, by which time the Chancellery was almost completely destroyed.

According to an account by Andrei Gromyko, the future Soviet Foreign Minister:&nbsp;

"Only the walls remained, riddled by countless shrapnel, yawning by big shot-holes from shells. Ceilings survived only partly. Windows loomed black by emptiness…

"All this produced a grim and distressing impression. If photography of this underground citadel of Hitler existed, they would become a proper illustration to Dante’s Hell; just select which circle."

As a fluent German speaker, Hodge was tasked with clearing areas of the wrecked building with the aid of local civilians, in order to salvage any useful documents.

In 1946 Hodge was transferred to the War Crimes Investigation Unit, and given a new secret order: to track down and apprehend Heinrich Hornetz, a former member of the SS who served at the Neue Bremme Concentration camp.

Hodge, along with Major Peter Davies and Sergeant John Robbins, captured Hornetz at his home near Frankfurt. During the mission the group were attacked by German gunmen and chased through a nearby forest, where Hodge was shot and wounded.

They eventually made it to safety, and Hornetz was later tried, convicted and hanged for his crimes.

The auction also includes the original order for Hodge’s secret mission, and a pass from Commandant of the French Zone to aid him as he travelled across Germany.