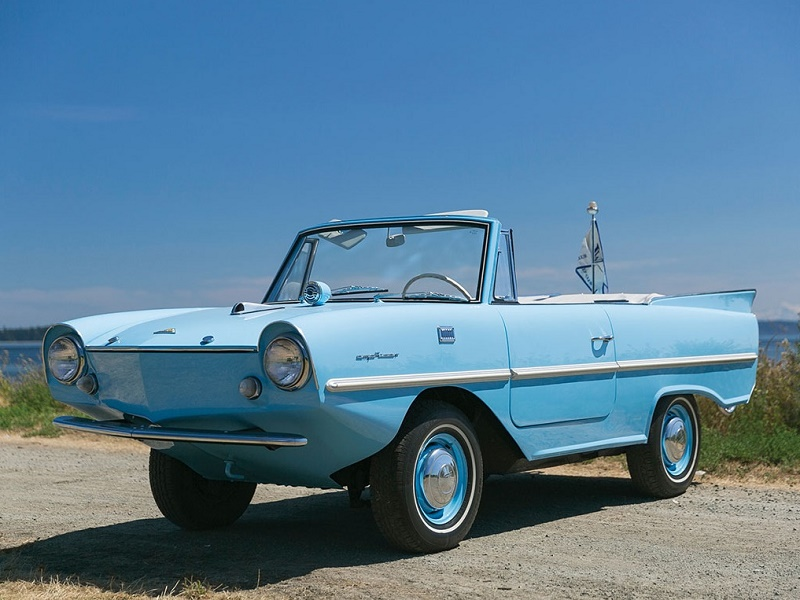 The upcoming RM Sotheby’s Monterey auction on August 18 – 19 is renowned for offering the world’s rarest and most remarkable classic cars.
But tucked away amongst this year’s line-up of vintage Ferraris, historic Aston Martins and Porsche supercars is a slightly less glamorous, but equally striking vehicle: the Amphicar Model 770.

The Amphicar made its public debut at the New York Auto Show in 1961, and was marketed to the American public as "the car that swims".

With watertight seals on the doors and a pair of rear propellers, it was the world’s first commercially-available, fully-amphibious vehicle.

Drivers could simple pull up to the shoreline, and – with a few minor adjustments – sail off into the sunset.

It even came with its own signalling flag, to conform to coastguard regulations.

The Amphicar was the brainchild of Hanns Trippel, the German industrial designer responsible for creating the iconic Mercedes-Benz Gullwing door.

Trippel had previously designed amphibious vehicles for the German military during WWII, and took over the running of Bugatti’s Molsheim factory during the Nazi occupation of France.

Following the end of the war he served time in a French prison for profiteering, before being released in 1949 and returning his attentions to the civilian automobile market.

He then spent 15 years and $25 million dollars developing the Amphicar, which was manufactured in West Germany and marketed in the United States from 1961-1967.

Upon its release, one reviewer called the Amphicar "a vehicle that promised to revolutionize drowning", and with a top speed of just 70mph, the novelty value alone was not enough to entice American drivers.

Although the manufacturer was geared up to produce 20,000 Amphicars per year, just 3,878 examples were ever built before the company folded in 1965.

However, the unusual car certainly captured the imaginations of some. Famous owners included President Lyndon B. Johnson, who would often prank visitors to his ranch by driving his Amphicar straight into a lake, screaming that his brakes had failed.

Today original Amphicars are highly collectible, and well-restored examples can sell for between $60,000 and $100,000.

The auction house states that "this car is perhaps the most fun for the money to be found" – so if you’re struggling to decide between buying a new car or a boat, why not kill two birds with one stone?