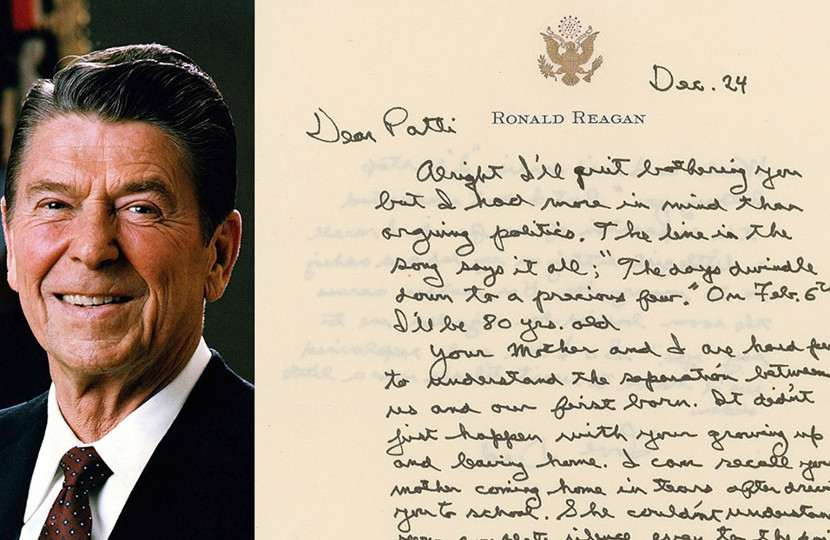 The collection spans centuries of world history, with key missives from names like Charles Darwin and Thomas Jefferson.

Niederhoffer says: “The letters form a real tapestry of history. Nothing was bought just to fill a hole. They all show a tremendous vitality and the key events of their time.

“I prefer letters to historic documents, because by the time they come to the president, they’re antiseptic and for posterity. Letters explain how people were really feeling. It gives you a feeling of what the normal day-to-day life was.”

One example, sent from US President Ronald Reagan to his then 37 year old daughter Patti Davis in 1989 and offered here with an estimate in excess of $20,000, perfectly illustrates this.

Davis was liberal in her political views and regularly clashed with her father over his conservative policies. At the time of writing they had been estranged for some time. The letter shows that for all his power and influence, Reagan was still vulnerable.

It reads in part: “Alright I’ll quit bothering you but I had more in mind than arguing politics. The line in the song says it all; ‘The days dwindle down to a precious few.’

“On Feb. 6th I’ll be 80 years old. Your mother and I are hard put to understand the separation between us and our first born…

I remember a loving daughter who never let us leave the house without waving goodbye from the window.

“We have some snapshots that reveal a difference in a little girl. We ask ourselves, ‘what did we do wrong?’ We were once a loving family. Well as I said earlier ‘I’ll stop bothering you’ but I don’t understand the separation of our family.”

Happily Davis did reconcile her differences with her father in the 1990s. They enjoyed some good years together until his death in 2004.