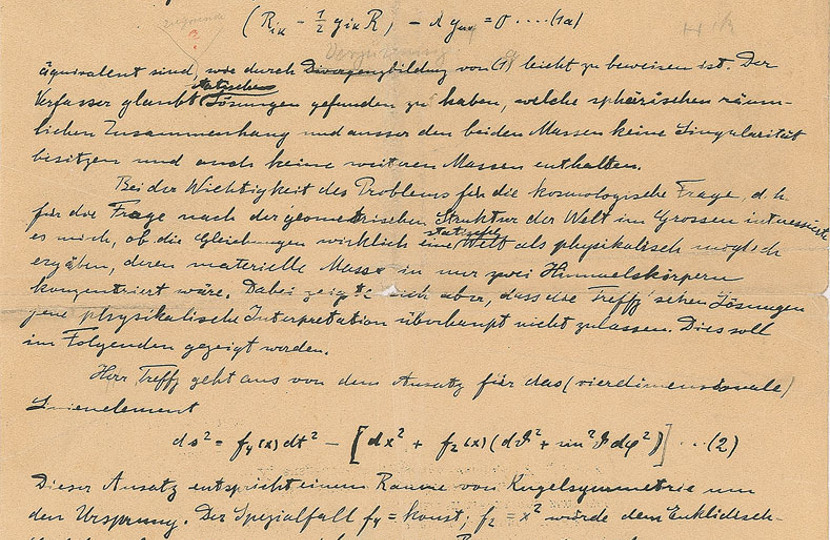 Albert Einstein published this paper in 1922, a year after he received the Nobel Prize (Image: RR Auction)

Albert Einstein’s handwritten manuscript for a paper he presented to the Royal Prussian Academy of Sciences in Berlin in 1922 will sell on June 13.

The title is: “Comment on E. Trefftz’s Paper: ‘The Static Gravitational Field of Two Mass Points in Einstein’s Theory’”.

Einstein writes: “In view of the importance of the problem to the cosmological issue, i.e., the question of the large-scale geometrical structure of the universe, I was interested to know whether the equations really did yield as a physical possibility a static universe whose material mass was concentrated in just two celestial bodies.

“It became apparent, however, that Trefftz’s solution does not permit this physical interpretation at all.”

Some enormously complicated-looking equations follow over two pages, one of which is Einstein’s cosmological constant (“(Rik – 1/2gikR) – λgik = 0.” if you must know) that represents the universe in its static state.

The inclusion of references to the General Theory of Relativity, Einstein’s most important work, makes this a key paper for collectors.

It’s also the first paper Einstein published after receiving the Nobel Prize in physics in 1921.

Last year a note Einstein gave to a bellhop in Tokyo sold for a record $1.5m. It explains Einstein’s own thoughts on happiness: “A calm and modest life brings more happiness than the pursuit of success combined with constant restlessness.”

A document signed by Einstein’s great hero, 17th century British scientist Sir Isaac Newton, is offered with an estimate of upwards of $20,000.

As well as his scientific work, which profoundly affected the world, Newton also served as master of the Royal Mint between 1696-1797. This letter refers to those duties.

Texts relating to Newton’s scientific or alchemical works are considerably more valuable than those of numismatic concern. A paper that features detailed instructions on how to make the Philosopher’s Stone sold for $275,000 in March.