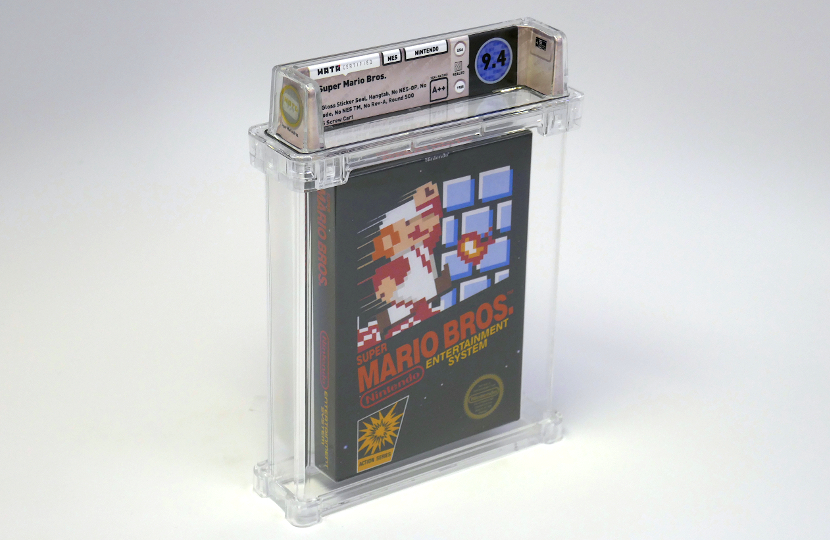 The unopened copy of Super Mario Bros. sold to a group of collectors for a world-record $100,150 earlier this month. (Image: Heritage Auctions)

A rare, unopened copy of Super Mario Bros. has sold for $100,150, setting a new world record price for a vintage video game.

The iconic game sold in a private transaction earlier this month to a group of collectors, and marks a significant moment in the hobby as the world’s first six-figure video game.

The previous record price for a copy of the game was $30,000, set by another sealed copy which sold on eBay back in July 2017.

“Super Mario Bros. is not only the most recognizable game of all time, it saved the video game industry in 1985,” said Wata Games President, Deniz Kahn.

“In terms of rarity, popularity, and relevance to collectors, this game has it all. Mario is the most recognized fictional or non-fictional character in the world, more so than even Mickey Mouse.”

The game is a highly rare ‘sticker sealed’ copy which was only available in New York and Los Angeles, the two cities Nintendo used as test markets for the launch of the Nintendo Entertainment System (NES) in 1985 and 1986.

The copy is the only-known unopened example from this early release, and had been certified by Wata Games with a Near Mint grade of 9.4 and a “Seal Rating” of A++.

“We all knew how hard it is to find an open copy of this version in nice condition, but to find one still sealed is truly something I thought I would never see, even after selling vintage video games for over 20 years,” said Zac Gieg, owner of Just Press Play Video Games in Lancaster, Pennsylvania, and part of the group that purchased the game.

The original Super Mario Bros. has been described as the ‘Action Comics #1’ of video games, in relation to the 1938 comic book which first introduced the character of Superman.

More than 80 years on that issue is seen as the ‘Holy Grail’ for collectors, and many believe Super Mario Bros. could hold a similar place within the hobby in years to come.

“More and more collectors from other fields are discovering how much fun it is to collect video games,” said Rich Lecce, another member of the group of collectors which also included Jim Halperin, Founder and Co-Chairman of Heritage Auctions.

“It’s a very exciting time for our industry, especially with Heritage Auctions entering the secondary market for collectible vintage video games. With upcoming movie projects and three Nintendo-themed Universal amusement parks slated to open in 2020, the impact and popularity these characters have on our culture will be that much more apparent to new collectors entering the market.”