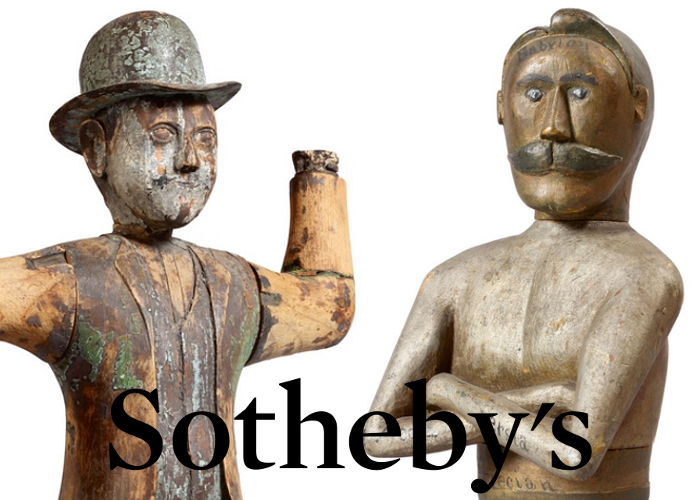 Our auction of the week is ‘Sculptural Fantasy: The Important American Folk Art Collection of Stephen and Petra Levin’, which takes place at Sotheby’s in New York on October 10.

The remarkable sale features some of the most significant works of American figural folk art to appear at auction in decades. Here are 10 of our favourite lots from the collection…

A late 19th or early 20th century carved and polychrome paint-decorated wood sculpture of a domestic lady with broom and dustpan, complete with its original paint and a paper label which reads “Hand made by father”.

A rare late 19th or early 20th century carved and painted pine whirligig figure in the form of a man wearing a bowler hat.

Millerite bust of a man with crossed arms

A rare carved and polychrome paint-decorated pine sculptural bust of a man, circa 1840, believed to be the work of a Millerite carver and designed to hold scrolls featuring Biblical verses.

The Millerites were a religious group predominantly based in upstate New York and Vermont, who followed the teachings of former American Baptist preacher William Miller (1782-1849) during the 1840s.

A highly rare wooden carving, dated circa 1910, depicting the scene of an exorcism with a group of people surrounding the bed of a child, with a demonic figure perched on top.

An important carved and painted work entitled ‘The Buckeye Family’, regarded as one of America’s most significant and iconic works of folk art sculpture.

The sculpture is the work of Tennessee greengrocer Joseph Cummings Lee, who created the figures circa 1925 using an axe, a pocket knife, some sandpaper and paint.

The near life-sized group attracted national attention, and when Lee placed the sculpture on display in his store in Beaver Hill, Overton County more than 65,000 people signed the guest book as they travelled to see them.

Lee later said of his work: “When art people came to see my figures, I felt small and wanted to crawl under the store, but way before they were gone, they made me feel like I am somebody.”