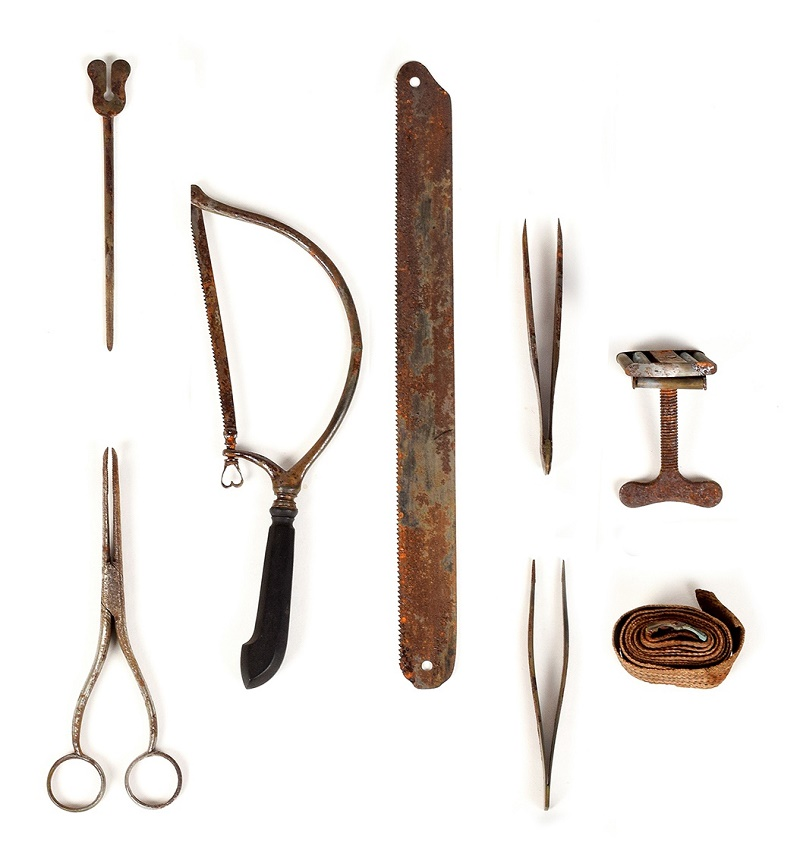 A pair of surgical amputation kits used during the Revolutionary War by Dr. John Warren will be offered for sale at RR Auction.
The two kits, which feature gruesome implements such as rusted bone saws and bullet forceps, were used on wounded soldiers by Warren as he served with the Continental Army.

Together, the two historically important kits are expected to sell for more than $50,000 in the online sale which concludes on July 12.

"These remarkable Revolutionary War amputation kits hail to a time before doctors understood the importance of sterilization, and the instruments show heavy signs of use," say the auction house.

"Wounds from musket balls were rarely superficial, and amputation was fairly common—even though as few as 35% of men survived the procedure. Amputation kits were therefore essential on the battlefield and in very high demand.

"The Continental Army had little in the way of surgical instruments to provide their doctors, and surgeons were forced to rely on their own personal property to make it through the war. Dr. John Warren carried these kits with him throughout his patriotic service."

Warren’s older brother was Dr. Joseph Warren, the celebrated American patriot whose death at the Battle of Bunker Hill served as an inspiration to soldiers throughout the conflict.

Following the end of the war John Warren returned to his medical practice in Boston, and in 1782 established the world-renowned Harvard Medical School, where he taught for many years until his death in 1815.

The first kit comes in its original shargreen case, and was a gift to Warren from his older brother, which dates it from between 1773 (when Warren joined Colonel Pickering’s Regiment as an army surgeon) and 1775 (when Joseph Warren was killed).

The second kit is presented in a mahogany case, and was later exhibited in a 1906 Harvard exhibition of surgical instruments, organized by Warren’s grandson Dr. J. Collins Warren.

The two amputation kits were passed down into the collection of Harvard Medical School, where they remained for almost 200 years, before being sold at auction by the university to a private collector.