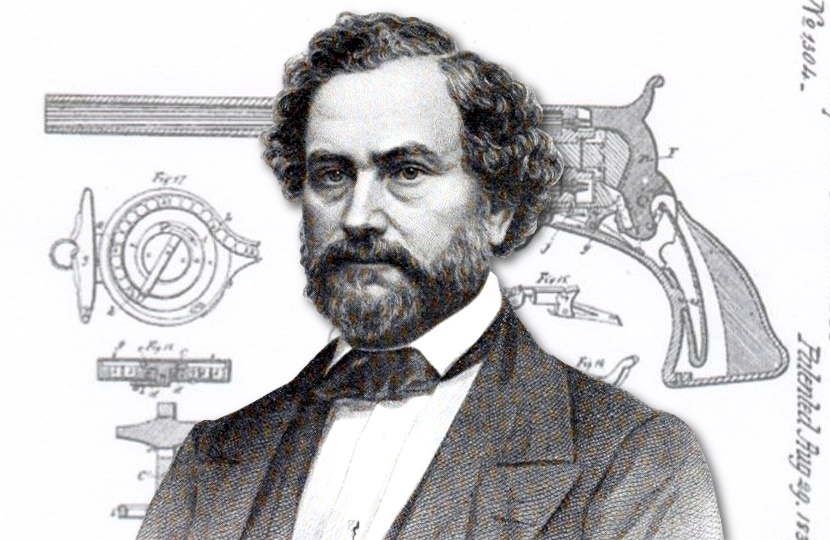 Samuel Colt’s original patents for his revolver, which helped change the course of U.S history, are set to auction at University Archives this month.

The sale on February 26 will offer an archive of signed documents once owned by Colt himself, relating to his early designs for a “revolving gun”, with an estimate of $40,000 – $50,000.

Samuel Colt first patented his revolver in the U.S in February 1836, having already secured the patent in the U.K in 1835 to protect his rights overseas.

He was advised in the matter by a friend of his father, Henry L. Ellsworth, a former Mayor of Hartford, Connecticut, who was later appointed the first Commissioner of the U.S. Patent Office.

With encouragement and letters of recommendation from Ellsworth, Colt formed the Patent Arms Manufacturing Company of Paterson, New Jersey with a group of venture capitalists and set about producing his new weapon.

The archive features Colt’s own retained drafts of three handwritten documents he sent to Ellsworth regarding improvements to the revolver, as he sought to perfect the design.

“The petition of Samuel Colt of Paterson New Jersey respectfully sets forth that your petitioner has made various improvements in his & other patent revolving cylinder guns and their appendages, and being desirous of securing his rights until he can perfect them, he prays that the accompanying description and drawing may be filed as a caveat in the confidential archives of the patent office…”

The second two documents list seven improvements Colt had made to his original designs, which were eventually patented in August 1839.

Initially his weapons proved unsuccessful, and by 1843 he was forced to close down the factory – although he still retained the exclusive rights to produce the revolver.

However, in 1847 he received an order for 1,000 guns from Captain Samuel Walker of the Texas Rangers, who had seen first-hand how effective the revolvers could be during the Seminole War.

“Colt’s Repeating Arms are the most efficient weapons in the world and the only weapon which has enabled the frontiersman to defeat the mounted Indian in his own peculiar mode of warfare.”

In addition his ability as an inventor, it was equally Colt’s his use of patents that helped him dominate the firearms market in the 19th century.

He aggressively pursued competitors and imitators through the courts, creating a virtual monopoly that made him an incredibly wealthy man.

When he passed away in 1862 at the age of 47 he was one of America’s richest men, and his guns were widely used around the world.

During a violent era of Western expansion, Colt’s guns quickly found popularity with soldiers and civilians alike, and his genius for marketing created a mythos around the revolver which survives to this day.

Following the U.S Civil War he was immortalized with the phrase “Abe Lincoln may have freed all men, but Sam Colt made them equal”.

Samuel Colt’s revolver played a significant role in the development of the United States in the 19th century, and his patent documents are integral to the story of how the West was won.