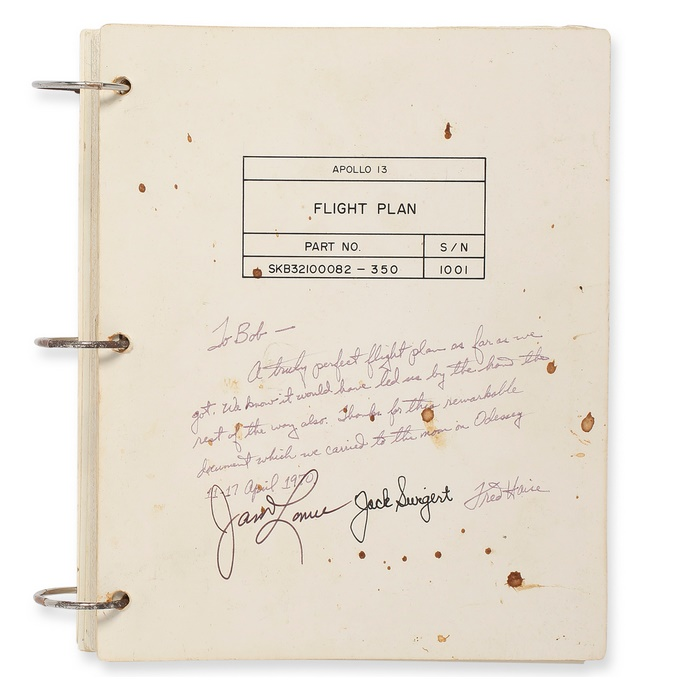 The original NASA flight plan used during the ill-fated Apollo 13 mission will be offered for sale at Sotheby’s later this month.
The space-flown plan is expected to sell for $30,000 – $40,000, and stands as a record of one of the most dramatic missions in the history of space exploration.

The plan bears the handwriting and detailed notes of all three crew members, made throughout their battle for survival in outer space.

On April 13, just 56 hours into the mission, an oxygen tank exploded, causing a loss of power which almost crippled the Odyssey command module and led to the famous radio transmission:

With most of their oxygen supply released into space, the crew aborted their mission to the moon, and were forced to use the Aquarius lunar module as a makeshift ‘lifeboat’.

However, supplies aboard the lunar module were designed to sustain two people for a day and a half, not three people for four days.

With little remaining power, a drastic drop in temperature, and deadly carbon monoxide building up inside the module, the crew members and the NASA ground team improvised an ingenius survival plan which involved two rolls of tape, a cardboard cue card and pieces of a space suit.

The crew returned to Earth inside the command module, using dwindling supplies from the still-attached lunar module, before jettisoning it during re-entry.

Following four tense days in which the world collectively held its breath, the Apollo 13 crew splashed down safely on April 17.

The plan was later signed by Lovell, Swigert and Haise, and presented as a gift to the mission’s lead flight planner Robert ‘Bob’ Lindsey, with the inscription:

"TO BOB – A TRULY PERFECT FLIGHT PLAN AS FAR AS WE GOT. WE KNOW IT WOULD HAVE LED US BY THE HAND THE REST OF THE WAY ALSO. THANKS FOR THIS REMARKABLE DOCUMENT WHICH WE CARRIED TO THE MOON ON ODYSSEY 11-17 APRIL 1970. FRED HAISE. JAMES LOVELL. JACK SWIGERT."

The Apollo 13 mission has since inspired countless books, TV shows and an award-winning Hollywood blockbuster movie – but this original flight plan is perhaps the closest collectors will ever come to owning a piece of the historic drama.