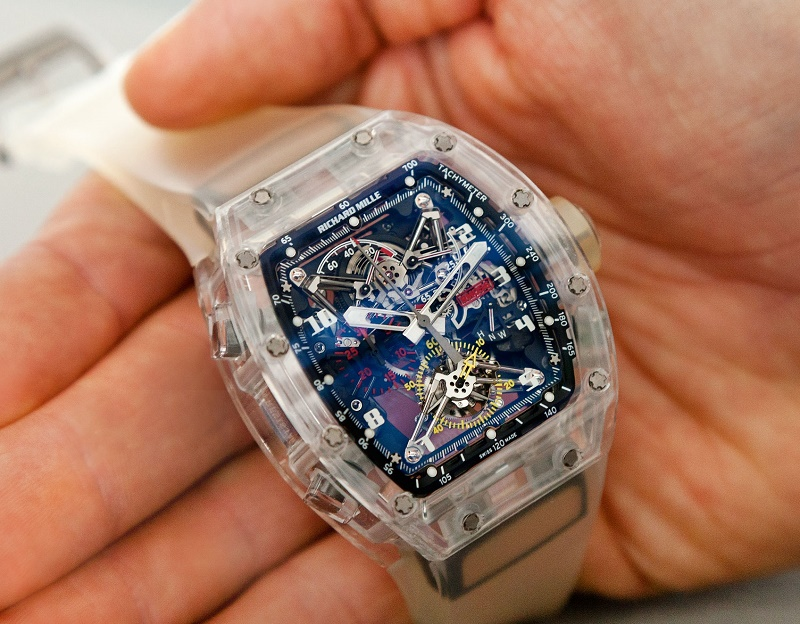 A rare prototype wristwatch known as "the billionaire’s handshake" will be offered for sale at Christie’s this month, where it’s expected to sell for up to $1.5 million.
The RM056 Split-Seconds Chronograph was created by luxury Swiss watchmaker Richard Mille, and is one of only a handful in existence.

The entire watch is made of synthetic sapphire, the second hardest-known substance after diamond, and each case takes an estimated 800 hours to cut into shape and polish.

Its incredible skeletonised movement, clearly visible through the case, is also amongst the most complicated movements ever created for a Richard Mille timepiece.

Just five examples were made in its first production run, but the watch offered at Christie’s is a pre-production prototype.

The exact number of prototypes made is unknown, but the back of the case is marked ‘Prototype No. 2.’

Having been described simply as "a masterpiece", the watch will cross the auction block in New York on June 21 with an estimate of $1 – $1.5 million.

The company was established in 1999 by Mille, a French watchmaker with an obsession for technical innovation.

He became renowned for using aeronautical and weapons-grade materials to create timepieces, a practice which resulted in watches so exclusive they are known as "the billionaire’s handshake".

"It is because I am a victim of my own inability to compromise," said Mille. "Every time I get to a point where I need to decide to save cost or to push performance to the very extreme, I always choose the latter course."