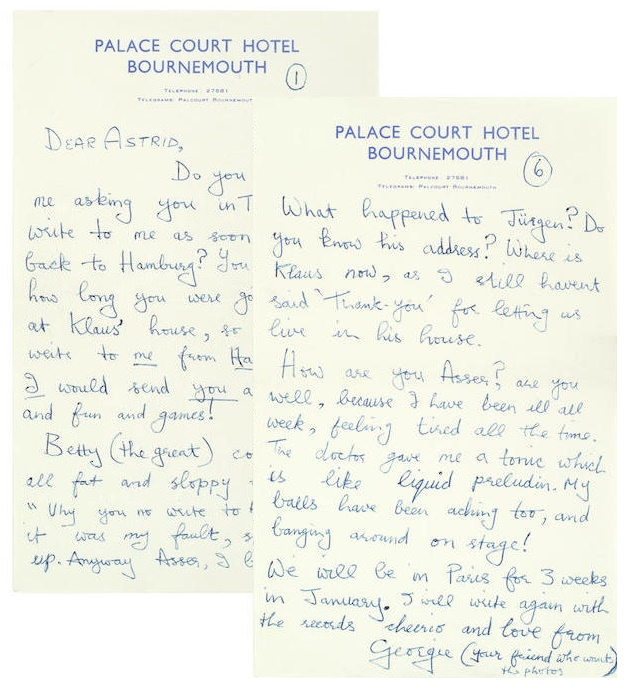 Photographer Kirchherr first met The Beatles in Hamburg in 1960, and was engaged to former band member Stuart Sutcliffe before he died in 1962.

Harrison wrote her the letter in August 1963, during The Beatles’ six-night residency at the Gaumont Cinema, Bournemouth.

He was confined to his hotel room between shows due to illness, and passed the time composing the six-page letter, in which he talks about his new Jaguar, his financial plans for the future, and a particularly personal medical complaint.

Just a few months earlier, the band had released their debut album Please Please Me, which included eight original compositions by Lennon and McCartney.

It was already clear to Harrison that the real money was in song writing and publishing, as he notes:

"You know that Paul and John are going to be very rich soon, when they collect the money they have made by writing all those songs…"

During the same week in which he wrote the letter, and with the idea firmly in his mind, Harrison wrote his first original composition – ‘Don’t Bother Me’ – which was later recorded for the band’s second album ‘With The Beatles’.

However, his other plan to raise some cash lay in his idea for a book, which would use previously unseen photographs of the band.

To this end, he asked Kirchherr to send him some of her photographs from their early days in Hamburg:

"Could you look through your photographs and find some – or all of the photos that have The Beatles either all together or separately, or that have any of us with other people in them, in fact any photographs at all that may be of interest and then if you felt in a HAPPY ASTRID MOOD, do you think you could either give or lend them to me…

"I don’t think that you would like to see me poor and hungry, so I have decided to make a book…a daft story about the BEATLES, with some photographs in it, and then I hope to sell it to all the nice people and then I can buy food with the money…Can’t I?"

Harrison also mentioned a rather more personal complaint, which illustrates the closeness of his friendship with Kircher:

"I have been ill all week, feeling tired all the time. The doctor gave me a tonic which is like liquid preludin. My balls have been aching too, and banging around on stage!"

In the end Harrison never produced the book, but presumably his balls got better.