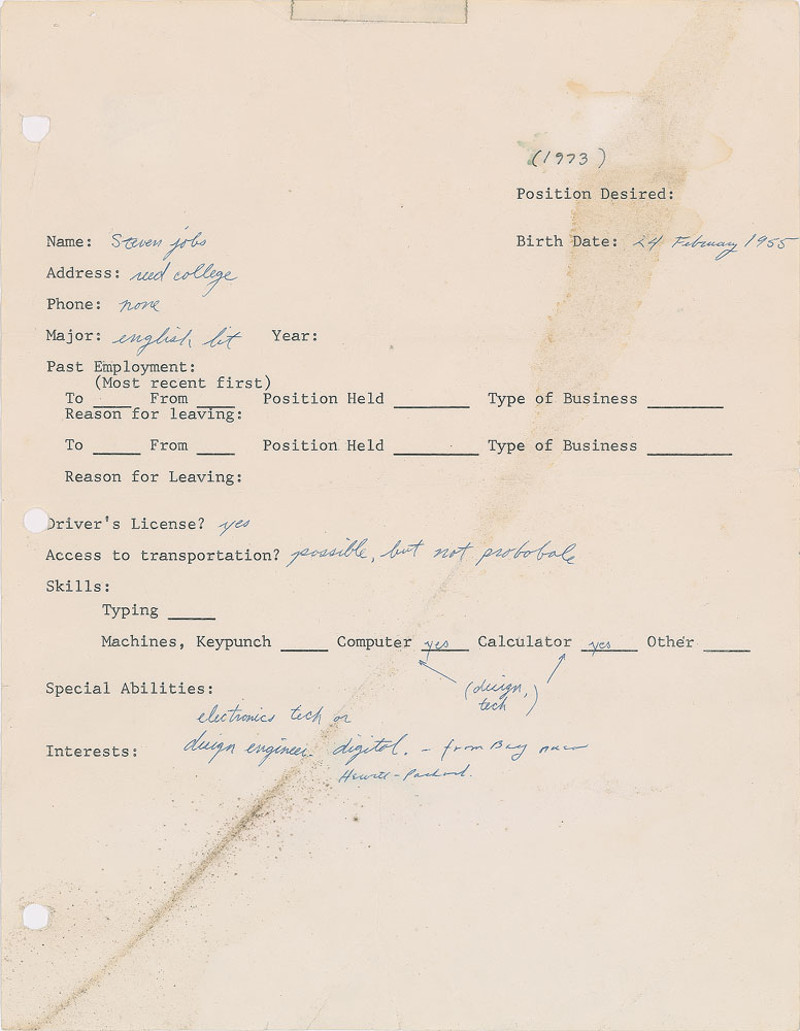 Steve Jobs is one of the most sought after signers in the world of autograph collecting.
The former Apple CEO was extremely reluctant to sign his name for autograph seekers, meaning there are few genuine examples in circulation. Over the last couple of years we’ve seen values rise dramatically, culminating in a $50,500 record for a signed copy of Newsweek at RR Auction last year.

From March 8-15, RR will host a Pop Culture Auction featuring three examples of Jobs’ signature. One, a job application filled out by Jobs when he was just 18, is valued in excess of $50,000. That places it in new record territory.

Jobs had dropped out of Reed College the previous year as his parents were running increasingly low on funds to pay his tuition. It’s not clear exactly what position or company Jobs was applying for here, but he did start working as a technician for Atari in 1973.

A Jobs-signed Mac OS X Administration Basics manual from 2001 is also featured with an estimate north of $25,000.

The piece is accompanied by a letter of provenance stating just how hard the consignor had to push for a signature. “I rolled down my window and called up his name,” the consignor recalls. “He asked me whether he knew me. I told him I certainly knew who he was and immediately asked him if he would be kind enough to sign my Mac OS X Administration technical manual.

“He refused and said ‘I feel weird doing that.’ I refused to back down. After a bit of cajoling on my part, he finally told me to hand over the manual and pen. He said ‘give me those’ and he autographed my manual.”

The final autograph of the sale is a newspaper clipping from June 10, 2008 announcing a new version of the iPhone will be sold for $199.

Again a letter of provenance provides an insight into why Jobs’ was such a tricky “get” for collectors. “…My mom noticed Steve Jobs sitting outside with a friend,” the consignor states.

“She picked up a newspaper off the counter which had a photo of Steve on the cover talking about the release of the next iPhone, and she walked outside, asking Steve to sign the paper.

“Steve politely declined several times, stating that everything at Apple was a group effort, so he didn’t like to sign and take credit for everything.

“My mom is pretty persuasive and was eventually able to convince Steve to sign; but under Steve’s condition that the person sitting with him would have to sign it as well.”

Jobs is the sole businessperson who commands these kinds of prices at auction, a testament to his reputation as a freethinking innovator and tech guru.