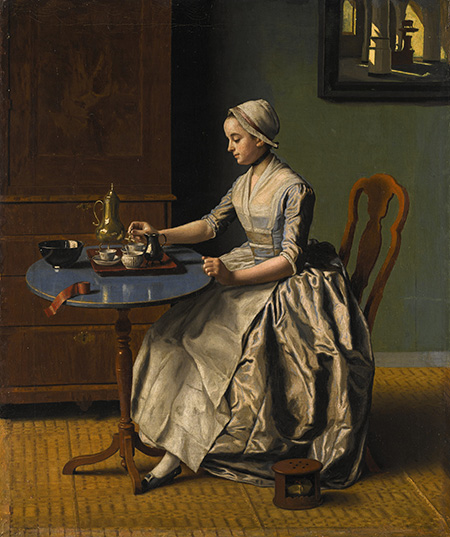 A masterpiece by Jean-Etienne Liotard is heading to auction at Sotheby’s for the first time in 250 years.
Dating from 1755-56, ‘A Dutch Girl at Breakfast’ is one of the few works by the celebrated Swiss artist to remain in private hands, and is expected to sell for £4-£6 million ($5.7-$8.5 million).

The painting was amongst the highlights of a recent exhibition at the Royal Academy of Arts, the first major retrospective of Liotard’s work ever held in the U.K., which helped bring his name to a wider contemporary audience.

Liotard was one of the most sought-after portrait artists of his era, painting portraits of British, French and Austrian royalty at the peak of his career.

Exceptionally well travelled, he was known for his eccentricity as well as his talent, with his waist-length beard and oriental outfits earning his the nickname ‘The Turk’.

"Liotard was an ‘outsider’, an extraordinarily innovative artist whose remarkable technical mastery won him the admiration of Enlightenment Europe and places him today among the greatest artists of the 18th century," said Alex Bell, Joint International Head and Co-Chairman of Sotheby’s Old Master Paintings Department.

"The incredible finesse and astonishing vivacity of his art is everywhere in A Dutch Girl at Breakfast. The painting’s extraordinary unbroken provenance stretching back almost 250 years is matched only by its rarity in Liotard’s oeuvre, both in terms of its subject and its medium.”

‘A Dutch Girl at Breakfast’ was originally acquired in 1774 by Liotard’s long standing friend and patron, William Ponsonby, 2nd Earl of Bessborough, and has remained in the possession of his descendents ever since.