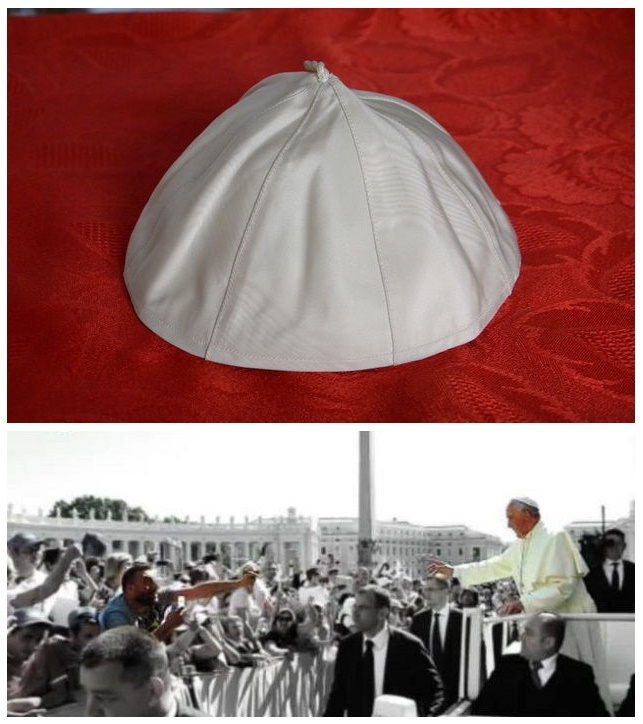 A silk skullcap worn by Pope Francis will be sold online to raise funds for a children’s charity later this month.

It was originally acquired by an Italian TV show host in June 2014, during the general audience in St Peter’s square. Having spotted the man in the crowd offering his own cap, Pope Francis reached out and took it, then swapped it for his own.

The host recounted his story:

"It was June 4, 2014 when, during the general audience in St Peter’s square in Rome, my eyes crossed that of Francis. After exchanging glances, a gesture: my exchanges headdress with that of the Holy Father. A simple gesture, but equivalent to the Christian religion to have received a pardon.

"The magnetic effect of the object owned and worn by the pope was immediate, so much so that the skullcap still bears today a slight sign of lipstick as a faithful, who wanted to kneel and kiss the Holy Father’s headgear."

"It is extremely rare that a religious symbol of this magnitude goes up for auction," said Frederik Jamees, Catawiki’s specialist devotionalia auctioneer. "The Pope’s clothing is made especially for him, and after his death the articles automatically become relics, meaning that they are no longer allowed to be sold.

"This auction is a unique opportunity for museums, collectors and devout Catholics to acquire ‘a relic in the making’ and also to help others by donating money to Save a Child’s Heart. Given the Pope’s following, we expect to see an influx of bids from across the globe."

The auction takes place online from April 8 until April 24.