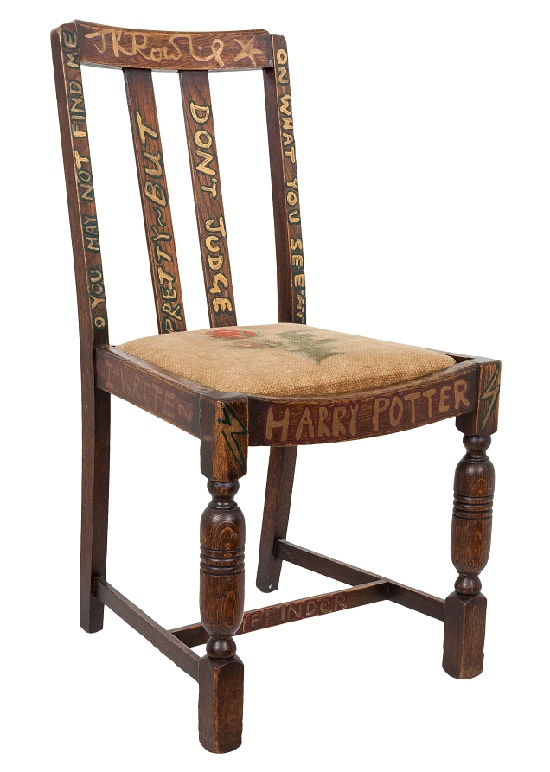 Described as "arguably the most important piece of Harry Potter memorabilia that exists", the chair was offered with an estimate of around $100,000 – but eventually sold for $397,000.

Rowling had originally decorated the chair by hand and donated it to a charity auction in 2011, where it raised $21,000 for the National Society for the Prevention of Cruelty to Children (NSPCC).

The original letter which she penned to accompany the sale read:

"Dear new-owner-of-my-chair / I was given four mismatched dining room chairs in 1995 and this was the comfiest one, which is why it / ended up stationed permanently in front of my typewriter, supporting me while I typed out ‘Harry Potter and the Philosopher’s Stone’ and ‘Harry / Potter and the Chamber of Secrets’. / My nostalgic side is quite sad to see it go, but my back isn’t. / J. K. Rowling."

It then sold again in 2009 for $29,000, before hitting the auction block at the Waldorf-Astoria hotel in New York, as the star lot of Heritage Auctions’ Rare Books Signature Auction.

"I was quite surprised [J.K. Rowling] would sell the chair; she originally sold it for a children’s charity," said owner Gerald Gray, who consigned the chair. "Following in the tradition that J.K. Rowling started with this chair, I plan to donate 10% of the hammer price achieved to Lumos, Rowlings’s children’s’ charity.

"I truly believe it should be on display somewhere. The United States has such amazing theme parks devoted to ‘Harry Pottery’ so I hope it ends up on display where fans may see it."

The chair was snapped up by an anonymous bidder.