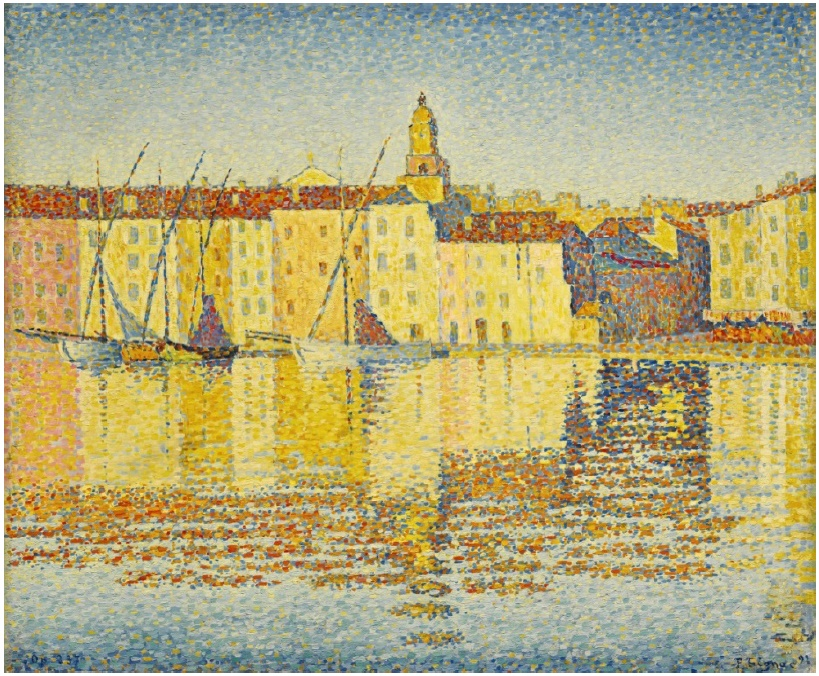 One of the most important paintings by Pointillist artist Paul Signac will be offered for auction at Sotheby’s next month.
‘Maisons du port, Saint-Tropez’ was painted in 1882, and given the designation ‘Op.237’, during a period in which Signac gave his greatest works ‘opus’ numbers to signify their importance.

Paul Signac was one of a small group of artists, along with Georges Seurat, and Camille and Lucien Pissarro, who inspired the term Neo-Impressionism – given to describe their own take on Impressionism, combined with the highly scientific painting technique known as Pointillism.

The painting was originally acquired in July 1958 by the parents of John Langeloth Loeb, Jr., the former United States Ambassador to Denmark who also served for almost 30 years on the board of the Museum of the City of New York.

Having remained in his family collection ever since, and never before appeared at auction, the painting will now cross the block for the first time with an estimate of $8-$12 million.
"With its effusive color and exquisite orchestration, Maisons du port, Saint-Tropez is a true manifesto of Pointillism," said Jeremiah Evarts, Head of Sotheby’s Impressionist & Modern Art Evening Sales in New York.

"It was created at a time when Signac was inheriting the mantle of his friend and fellow Neo-Impressionist Georges Seurat, who passed away soon before this work was painted. Through this stunning view of Saint-Tropez, Signac is searching for the musicality and beauty in the world around him, and the resulting ‘Opus’ is the greatest we have seen come to auction in almost a decade."

Further highlights from the auction will include Pablo Picasso’s 1952 portrait of his youngest daughter Paloma, estimated at $4-$6 million; Woman in Underclothes and Stockings by Egon Sciele, valued at $2.5-$3.5 million; Claude Monet’s 1884 work ‘Marée basse aux Petites-Dalles, estimated at $3-$5 million; and Composition au Ceval Blanc by Fernand Léger, priced at $3.5-$5 million.