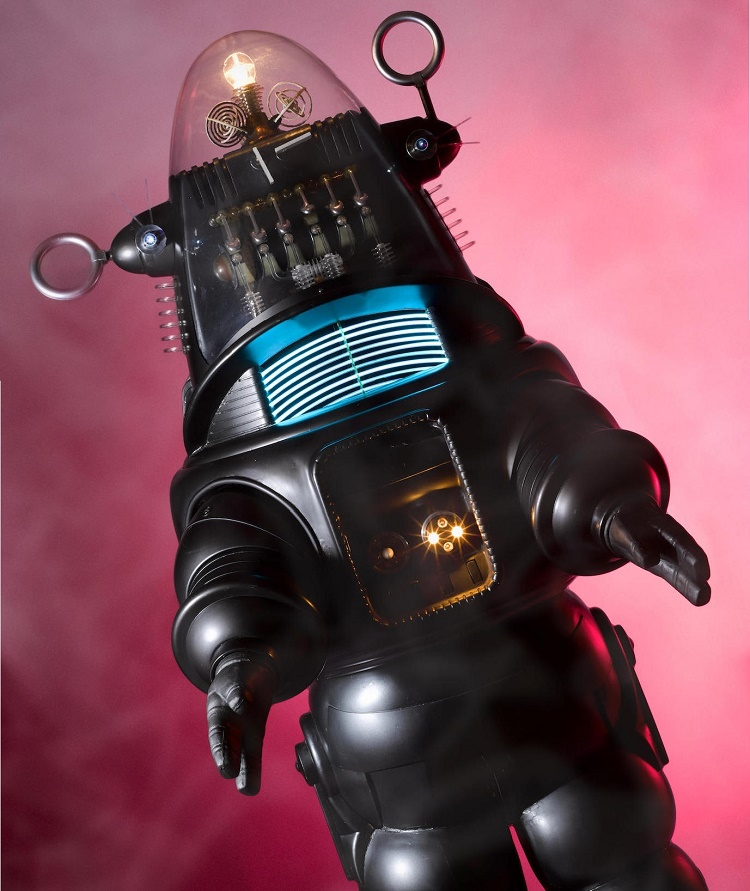 Bonhams has announced the sale of Robby the Robot – one of the most iconic sci-fi props in movie history.
The seven-foot tall robot suit will be the star lot of the upcoming ‘Out of this World!’ auction, held in conjunction with Turner Classic Movies.

Bonhams hasn’t placed an estimate on Robby, but he’s expected to easily exceed the $1 million mark when he lumbers onto the block in New York on November 21.

Robby first appeared in the classic 1956 film Forbidden Planet, as the mechanical servant of the mysterious Dr. Morbius.

He was designed by members of the MGM art department, and built at a cost of $125,000 – at that time making him one of the most expensive movie props ever created.

The movements of the three-part suit could be controlled from inside by the wearer, or externally by an operator using an auxiliary control panel.

Having become an instant hit with audiences, Robby then starred in the 1957 film The Invisible Boy, and later made cameos in dozens of TV shows and movies, such as Lost in Space, The Addams Family and The Twilight Zone.

Robby was one of the few famous items not sold off by MGM during its auction in 1970, which saw thousands of props and costumes cleared out from the studio backlot.

Instead he was acquired privately by collector Jim Brucker, and put on display at the Movie World / Cars of the Stars Museum, near Disneyland in California, where he was often reportedly vandalized by visitors.

When the museum closed down in 1980, Robby was sold to the American film director William Malone, one of the world’s leading collectors of Forbidden Planet memorabilia.

Malone then restored Robby back to original condition, using spare parts included by the MGM art department in his packing cases.

Having remained in Malone’s collection for more than 35 years, the upcoming Bonhams sale will mark the auction debut of cinema’s most famous robot.

"Robby the Robot is, simply, the heart of Forbidden Planet, the moral center of the film, as well as the key narrative device,"said Dr. Catherine Williamson, the Director of Entertainment Memorabilia at Bonhams.

"As such he is a major piece of entertainment memorabilia, one that any serious collector would be proud to own."