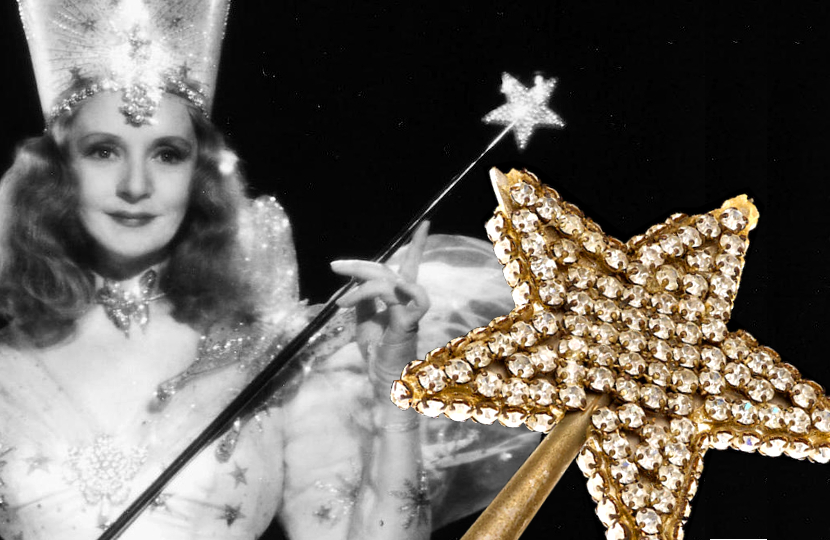 A wand made for Glinda the Good Witch in the classic film The Wizard of Oz will lead a movie memorabilia auction at Bonhams next month.

The wand will cross the block in Los Angeles as part of an auction celebrating Hollywood memorabilia from its “greatest year” of 1939.

Although the wand never appeared in the finished film, it is the only surviving example created for the production by the renowned costume designer Gilbert Adrian.

It was originally made for Billie Burke, who played Glinda the Good Witch of the North, and was likely used in behind-the-scenes wardrobe tests.

But when it came to filming, the use of new Technicolor film meant the production team had to re-think their designs (most notably by changing the colour of Dorothy’s slippers from silver to red).

The prop department had originally created a silver wand using clear rhinestones, but when it appeared on-screen in glorious Technicolor it seemed to lose its sparkle.

To stand out against the vibrant background of Oz, a new wand was created for Glinda using a variety of multicoloured stones, and it was this design which ultimately appeared on-screen.

It might not have made it into the finished film, but the silver wand did appear in a portrait photo of Billie Burke in her famous costume, which the actress commissioned herself to celebrate her role in the movie.

Burke then returned it to the MGM prop department, and there it remained tucked away for the next three decades.

Then, like almost every iconic prop and costume from the film, the silver test wand was sold off in 1970 at MGM Studio’s now-legendary clearance auction.

Two multicoloured, screen-used Wizard of Oz wands were also sold during the auction, and became exhibits at a newly-opened North Carolina theme park called The Land of Oz.

The park included a small museum containing props from the film, some of which were co-owned by the Hollywood star and renowned collector Debbie Reynolds.

However, in 1975 a mysterious fire swept through the park, destroying the Emerald City gift shop and Amphitheater, and during the chaos the museum was looted.

A ‘Dorothy’ dress worn by Judy Garland was stolen, and the two wands are thought to have perished in the fire – leaving the present silver test wand as the only surviving example made for the film.

Following the MGM auction the silver wand spent the next 47 years in the same owner’s private collection, before being sold to the present consignor in 2017.

Back in 1970, only a handful of collectors (and apparently no MGM studio executives) placed any value on props from the Golden Age of Hollywood

But today they are highly prized, and items from The Wizard of Oz are amongst the most sought-after and valuable of all.

Although Bonhams hasn’t revealed the wand’s pre-sale estimate, experts believe it could easily fetch a six-figure sum, and sprinkle a little Hollywood magic on whoever owns it next.