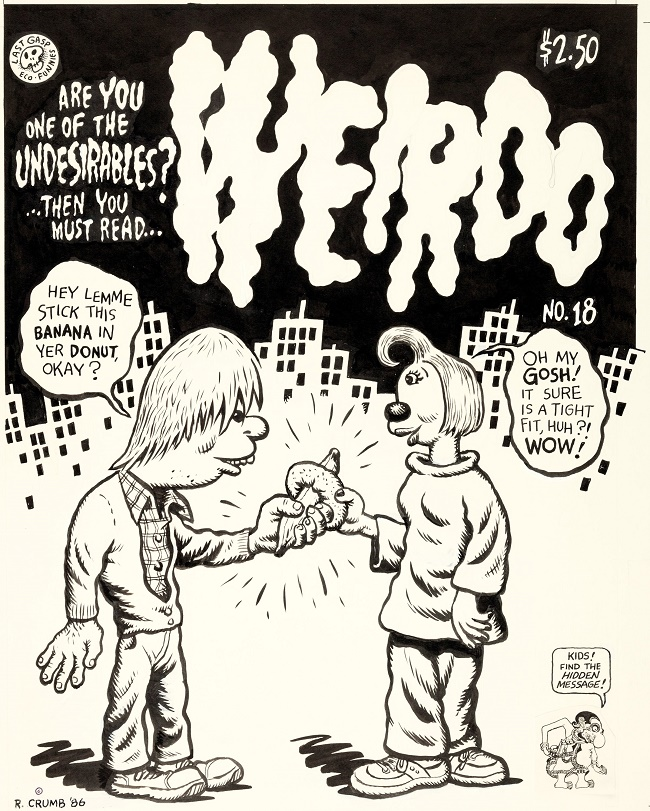 A series of rare original comic book artworks will be offered at Heritage Auctions, to raise funds for the Comic Book Legal Defense Fund (CBLDF).
The 11 works offered at Heritage include original cover artwork by the likes of Robert Crumb and Frank Miller. They were used to create a portfolio sold in 1986 to help free a store worker who was convicted for selling comic books – thus establishing the Comic Book Legal Defense Fund.

The non-profit organization, which protects the First Amendment rights of comic book creators, dealers and readers, is set to celebrate its 30th anniversary next month.

"This was not the first prosecution of comics, but it was the first time the industry came together to do something about it. Thanks to the artists who contributed to this portfolio, Michael was set free, and the CBLDF was formed to permanently defend the rights of our industry."

"This art represents a fledgling effort: Artists defending Correa’s legal bills in defense of his First Amendment right to sell comics," said Todd Hignite, Vice President of Heritage Auctions. "The portfolio was the group’s first major fund raising effort and by all measures it was a huge and lasting success."

Amongst the leading highlights is Frank Miller’s original unpublished cover art for Ronin #4, from an acclaimed limited series published in 1983-4, heavily inspired by Japanese Manga comics, and the ‘bande dessinée’ strips created for Belgian and French audiences.

With the vast majority of original art from the series still reportedly owned by Miller himself, the rare unpublished cover is expected to sell for $20,000+.

Another standout lot is the unpublished cover art for Robert Crumb’s Weirdo #18, first printed in 1986. Running from 1981 to 1993, Weirdo was one of the most significant titles of the underground comic book era, and Crumb’s unused cover comes with an estimate of $10,000+.

Further notable lots, all estimated at $2,000+, include an original page from Groo and the Thought Patrol by Sergio Aragones; Reed Waller’s original art from Omaha the Cat Dancer; a Flaming Carrot Original Drawing by Bob Burden; and the original art for Steve Bissette’s Censortivity.

The 11 artworks will be sold as part of the Heritage Auctions Autumn Comics Auction in Beverly Hills on November 17-19.