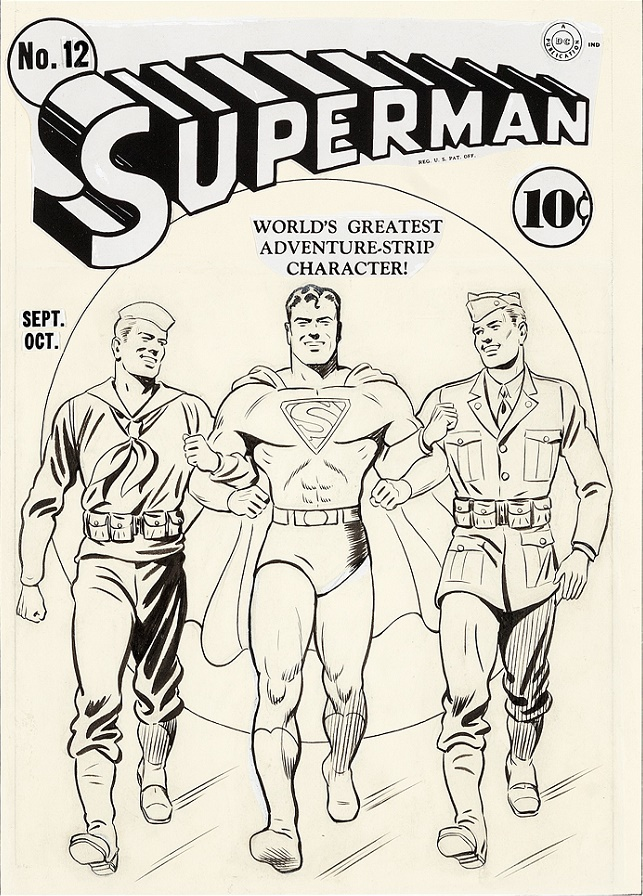 The original cover artwork from an iconic WWII-era Superman comic book is heading for sale at Heritage Auctions.
Fred Ray’s 1941 cover art for Superman #12, which features Superman alongside members of the American Military and Navy, will cross the block in Dallas on August 10-11.

The issue appeared on store shelves in September 1941, three months before the U.S joined WWII, following the attack on Pearl Harbour on December 7.

Until that point, Superman and the rest of the D.C Comics heroes had fought imaginary armies and dictators from imaginary European nations such as ‘Dukalia’.

Writers had been careful not to mention Germany or Italy by name, as the U.S hadn’t officially entered the war and the nation was divided about getting involved.

But a large number of writers and artists in the industry had family ties to Europe, and felt strongly that the U.S should take action against the Nazis.

The cover of Superman #12 was the first to feature members of the U.S Armed Forces, and marked a turning point for D.C Comics.

From then on, D.C heroes fought against the real world Axis Powers, and covers became increasingly patriotic – with Superman pictured beating up Hitler and Hirohito, or encouraging readers to buy war bonds.

Original cover artwork from the Golden Age of comic books is highly rare, as the majority was badly stored or simply thrown away.

This famous cover only survived thanks to Batman co-creator Jerry Robinson, a close friend of Ray’s, who requested the work be returned after publication.

"Not only was Jerry Robinson simply an amazing artist," said Joe Mannarino, Director of Comics & Comic Art at Heritage New York, "he was also a visionary collector. He was gathering and keeping his own art, and that of his friends in the business, at a time when no one thought anything at all of it."