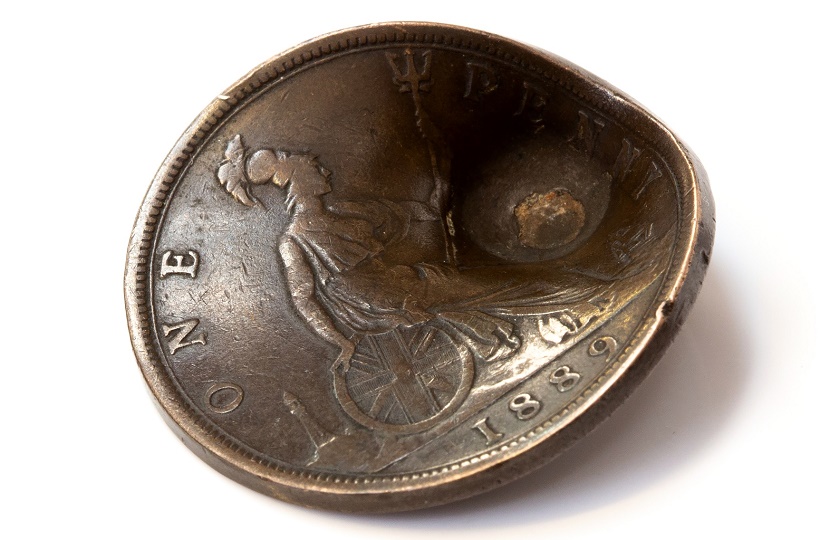 The penny miraculously saved the life of a British soldier by deflecting a German bullet aimed at his heart (Image: Hanson's Auctioneers)

A penny which miraculously saved the life of a British soldier during WWI will be offered for sale at Hanson’s Auctioneers next week.

The penny deflected a German bullet aimed at the heart of Private John Trickett, who kept it for luck inside the breast pocket of his uniform.

More than a century after it saved Trickett’s life, the penny has now been consigned for sale by his granddaughter and will cross the block at Hanson’s on March 22.

“It looks to me like a pistol bullet hit the penny at close range,” said Hansons Auctioneers’ militaria expert Adrian Stevenson.

“I’ve come across many stories of random objects saving soldiers’ lives but I’ve never seen anything like this before. It’s very poignant.”

John Trickett joined the British Army whilst still a teenager, and soon found himself fighting on the front line of WWI along with his two brothers Horace and Billy.

“He was a great big guy from a Lincolnshire farming background but as soft as a brush,” said Mr Trickett’s granddaughter Mrs Maureen Coulson. “He worked with horses back home and couldn’t bear to see the way they were treated on the battlefield.

“We think it’s likely he signed up to serve in the army when he was under age as he looked older than he was. Many soldiers were under age, they were so keen to serve their country.”

Horace and Billy were tragically killed, and John came within a whisker of a similar fate – but was saved from almost certain death on the battlefield by the coin in his top pocket.

“It’s likely John Trickett kept the penny there on purpose,” added Stevenson. “Soldiers used to keep objects in their breast pockets in an attempt to protect themselves from enemy fire and explosions.

“When the bullet hit the coin, it ricocheted up through his nose and went out through the back of his ear. It left him deaf and disabled but still alive.”

After his miraculous brush with death, Tricket was honourably discharged from the army in September 1918 and returned home to England, where he married his wife Clementine and raised eight children.

“Everyone in our family saw the penny and heard the story of how it saved my grandfather’s life – his two brothers, Horace and Billy, both died in the First World War,” said Mrs Coulson.

“My grandad was the only survivor. It’s strange to think that, but for that penny, his children would not have been born and I wouldn’t be here.”

The penny will be offered for sale along with a small collection of Trickett’s WWI ephemera, which includes his British War Medal and Victory Medal.

Together the collection has an estimate of just £30 – £50 ($40 – $65), but for Trickett’s children and grandchildren the penny is virtually priceless.

“I hope a keen militaria collector will buy and treasure these items,” added Mr Stevenson. “The penny is a poignant reminder of the fine line between life and death, particularly in wartime.”