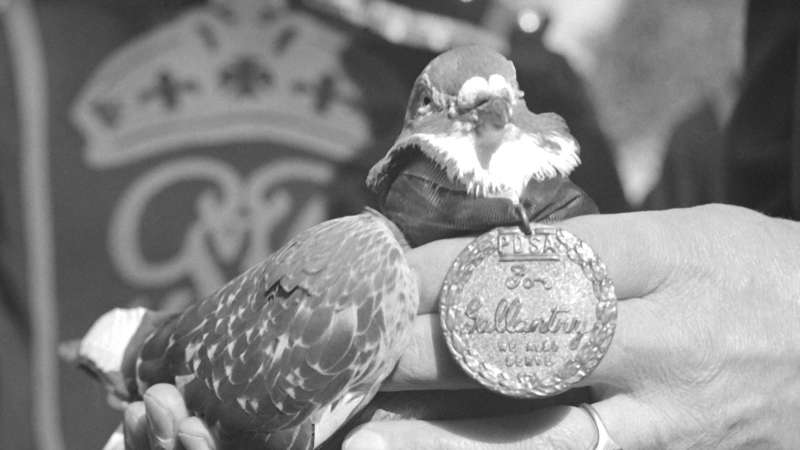 A medal awarded to a pigeon during WWII could fetch up to £20,000 when it goes up for sale in the U.K next week.
The Dickin medal for bravery was awarded to Princess, a carrier pigeon who flew secret messages for the Allies.

Having been discovered at a local valuation day, the medal will now cross the block at Hollway’s Auctioneers in Banbury on December 12.

The Dickin medal is regarded as the animal equivalent of the Victoria Cross, and around 60 were awarded during the war, to animals including 32 pigeons.

Princess flew messages across the Mediterranean Sea from Crete to Alexandria during the Nazi invasion, carrying information about enemy movements and the atrocities carried out on the islands.

She is said to have covered more than 500 miles during her missions, and was in constant threat of being shot down by German soldiers.

Carrier pigeons were a vital means of communication during the war, and were used regularly by the British Army until 1957.

Sadly for Princess, upon returning to her loft at RAF Alexandria she contracted a disease and died before the end of the war.

However, her efforts were recognised as some of the finest by any bird in the pigeon service, and she was posthumously awarded the medal in 1946.

Other animals to have been awarded the Dickin medal include Simon the cat, who caught rats aboard the HMS Amethyst and was injured during an attack in 1949; Ricky the dog, who was injured whilst sniffing out landmines in the Netherlands; and Olga the horse, who helped control panicked crowds in London after the explosion of an air raid bomb.