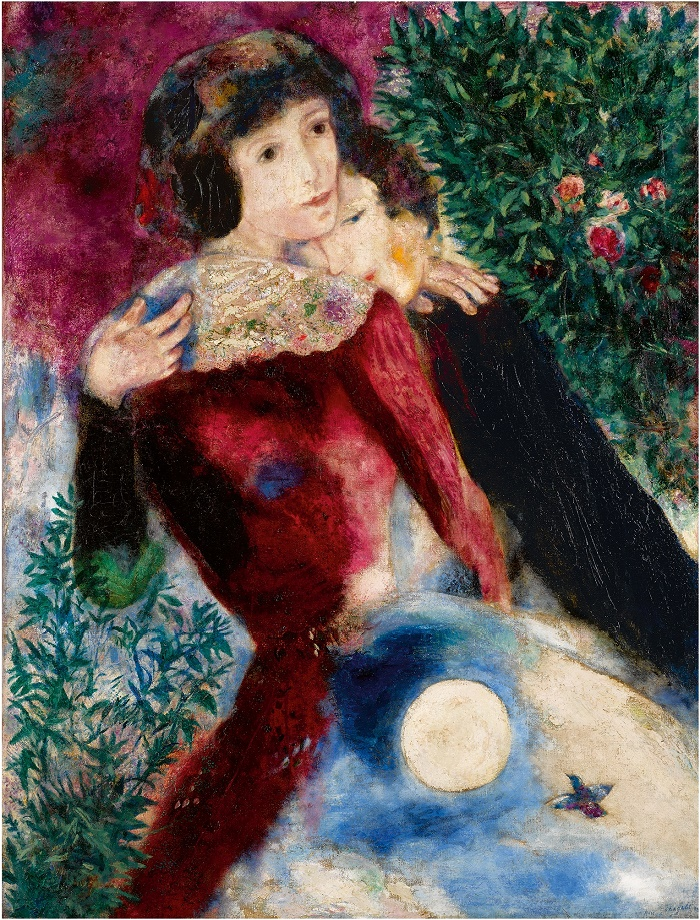 A masterpiece by Marc Chagall is set to appear on the open market for the first time in almost 90 years.
Les Amoureux, painted in 1928, is a portrait of Chagall’s childhood sweetheart and muse Bella Rosenfeld.

It was acquired by a private collector just months after it was painted, and has remained in the same family ever since.

It will now cross the auction block at Sotheby’s in New York on November 14, where it is expected to sell for $12 – $18 million.

The current record price for a painting by Chagall is held by his 1923 work Anniversaire, which sold back in 1990 for $14.85 million and is yet to be beaten.

Chagall first met Bella Rosenfeld in Vitebsk (now Belarus) in 1909, and fell instantly in love with her, writing at the time:

"Her silence is mine. Her eyes, mine. I feel she has known me always, my childhood, my present life, my future; as if she is watching over me, divining my innermost being….Her pale coloring, her eyes…They are my eyes, my soul."

In 1910 he moved to Paris to further his career as an artist, but suffered homesickness due in large part to missing his fiancé, and he returned in 1914 to marry her.

Chagall achieved critical acclaim in Russia during WWI, then returned to Paris with Rosenfeld in 1923, where they remained for many years.

The couple were finally forced to flee from the Nazis in 1941, and headed for New York, where Rosenfeld sadly passed away from a viral infection in 1944.

Chagall later wrote of his loss and experience of WWII:

"My enemy forced me to take the road of exile. On that tragic road, I lost my wife, the companion of my life, the woman who was my inspiration. I want to say to my friends in France that she joins me in this greeting, she who loved France and French art so faithfully. Her last joy was the liberation of Paris."

Les Amoureux captures Chagall’s passion for both his wife and their home in Paris, with Bella’s dress and skirt saturated with colors of the French flag.

"It is an honor to offer this exquisite painting by Marc Chagall, perhaps his greatest work of the 1920s," said Simon Shaw, Co-Head of Sotheby’s Worldwide Impressionist & Modern Art Department.

"Les Amoureux captures at a critical moment one of the most celebrated love stories in art history – the romance between the artist and Bella is palpable, and their happiness is at its very heart.

"In addition to the painting’s importance within Chagall’s career, it is truly exceptional to offer a work of this calibre that was acquired so soon after its creation, and which has remained in the same collection since."