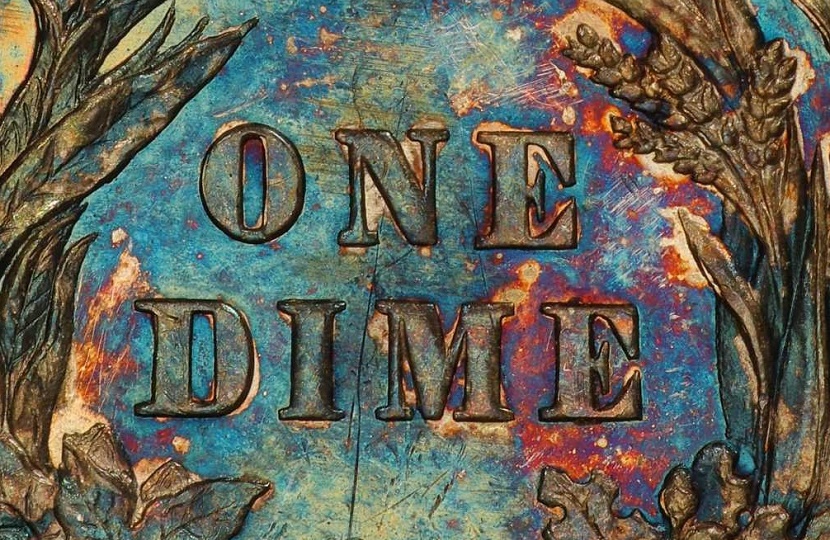 The 1894-S Barber dime is regarded as one of the most famous and coveted coins in all of U.S numismatics.

Just 24 examples were produced by the San Francisco Mint in 1894, and today only nine of those are known to remain in existence.

They have remained a source of fascination for coin collectors since they were first recorded in 1895, although only a handful of people have ever owned an example for themselves.

According to Stack’s Bowers Galleries, “fortunate is the numismatist — professional or private collector — who has the opportunity to even gaze upon one of these coins in real life or to hold it in their hands even for a minute or two.”

Although tens of thousands of silver dimes were usually produced each year, in 1894 just 24 examples were made by the San Francisco Mint.

The mystery behind the creation such a small number of the coins spawned a variety of theories over the decades.

Some believe they were struck to compensate a small discrepancy in the San Francisco Mint’s annual audit; others that they were produced for assay purposes, or to close out a gold bullion account.

The most famous story behind the coins suggests that John Daggett, superintendent of the San Francisco Mint, had the coins struck as special gifts for a group of bankers.

He also allegedly gave three to his daughter Hallie, and told her to keep them safe as they would increase in value – although on her way home the young girl spent one of the coins on ice cream instead.

In any case, a small handful of the coins ended up in the hands of collectors, and over the decades they developed an almost mythical status.

According to Stacks Bowers Galleries, the real story behind the 1894-S Barber dime saw staff at the San Francisco Mint create a treasured rarity without even knowing it.

In April 1894 the sub-treasury in San Francisco delivered nearly $1 million in old and damaged coins to the Mint to be melted down and recast as new coins.

When the process was complete, they discovered a small amount of silver remained – just enough to make 24 dimes using the new 1894 dies.

At the time staff expected a large order for new dimes to be placed at some point during the year.

However, the nation was in the midst of a severe financial crisis known as the Panic of 1893, and the order for new dimes never came in – leaving the 24 coins as the only examples issued.

A few made their way into the hands of Mint employees, three were sent for assay, and the rest were released into circulation.

Due to the superb condition of the nine surviving coins it was always assumed that they were struck as proofs – but in fact it was merely the unused condition of the dies which gave them that appearance.

The winning bidder was Dell Loy Hansen, the billionaire owner of the Real Salt Lake Major League Soccer team and a renowned numismatist.

According to CNN, Hansen is now just six coins short of assembling a collection featuring every coin produced by the US Mint from 1792 to the present day – although none of those final six coins are currently available for sale.

However, acquiring an exceptionally rare 1894-S Barber dime will have been a major milestone in his exceptional quest.

The coin has been described as one of the ‘Big Three’ of American numismatics, and on the rare occasion an example hits the open market it causes a scramble amongst top collectors.