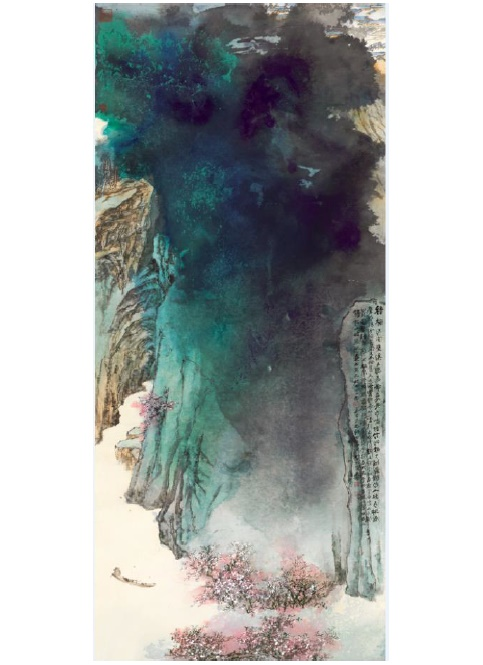 A late-career masterpiece by Chinese artist Zhang Daqian will be amongst the highlights of a forthcoming Sotheby’s sale in Hong Kong.
The Fine Chinese Paintings Spring sale will feature approximately 250 works from some of Europe and Asia’s most distinguished collections. Alongside Zhang Daqian, the line-up will include major works by the likes of Qi Baishi and Fu Baoshi.

Leading the sale will be Zhang Daqian’s Peach Blossom Spring, painted in 1982 following the artist’s relocation from the United States to Taiwan. Seeking the peaceful life, he instead encountered a bustling suburbia which grew up around him, and this work, depicting his ideal escape from the modern world, is accompanied by the poem:

"Planting plum trees upon the twin streams,
I grew old and weary of the noisy city;
Who can believe when A Chao arrived,
That earthly Peach Blossom Spring was just a dream."

Back in 1987, Peach Blossom Spring set a new auction record for modern Chinese paintings when it sold at Sotheby’s Hong Kong for HK$1.87 million (US$240,000). It will now cross the block once more, this time with a pre-sale estimate of HK$50-$65 million (US$6.4-$8.3 million), the highest estimate in the history of Sotheby’s Fine Chinese Paintings auctions.

"Well-documented in scholarly works and exhibited in leading museums in the United States, it is considered to be a pivotal work from Zhang’s late years, alongside Mt. Lu, another landscape by Zhang which is currently held by the National Palace Museum in Taiwan," said C.K. Cheung, Head of Sotheby’s Chinese Paintings Department.

"Peach Blossom Spring will be accompanied by a line-up of important works by Zhang Daqian from around the world and spanning the artist’s major periods, many of them boasting distinguished provenance."