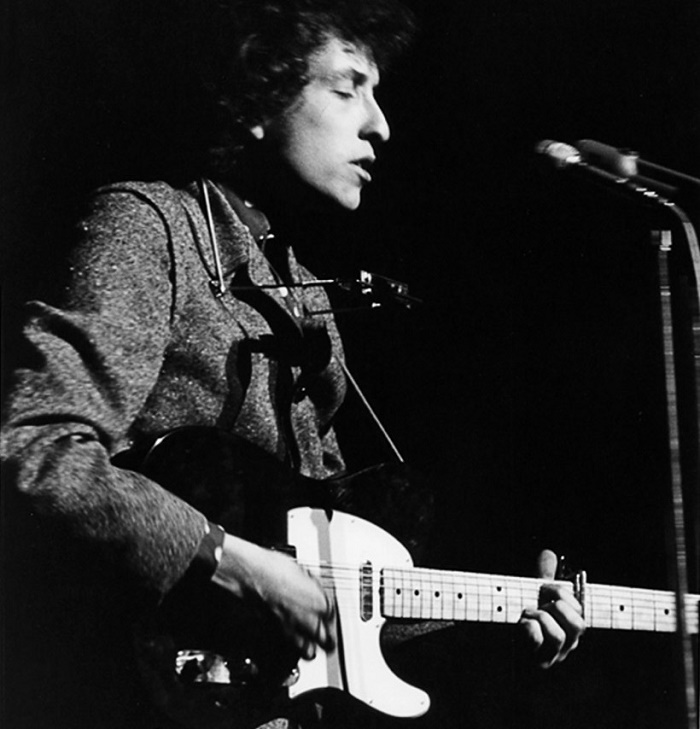 One of the most significant guitars in rock and roll history is heading for the auction block in New York next month.

Julien’s Auctions is set to offer a 1965 Fender Telecaster owned by legendary guitarist Robbie Robertson, and played extensively by Bob Dylan as he ‘went electric’ in 1965.

However, experts believe the instrument could achieve a far higher price, given the soaring value of Dylan memorabilia from this important period in his career.

In July 1965 Dylan stepped on stage at the Newport Folk Festival and rewrote his destiny with three songs, played fast and loud and electric to an audience more used to his acoustic protest songs.

Although met with an equal amount of cheers and boos, the ‘Dylan Goes Electric’ gig marked his rebirth as a true rock and roll star.

The 1964 Fender Stratocaster Dylan played that day sold at Sotheby’s in 2013 for $965,000, setting a then record as the world’s most valuable guitar

Following this now iconic performance, Dylan set out on the road in 1966 backed by Robertson and other members of the Hawks for his first ‘electric’ tour.

The chart success of his groundbreaking song Like A Rolling Stone, which reached #2 in the U.S charts, meant the shows were relatively well received – although Dylan still met with resistance from some folk fans who felt he’d betrayed them.

This animosity came to a head at the Manchester Free Trade Hall in May 1966, when a fan screamed “Judas!” at Dylan during a performance.

Dylan replied “I don’t believe you … You’re a liar!”, before turning to his band to say “Play it f###ing loud!” as they launched into a blistering version of Like A Rolling Stone.

Dylan played Robertson’s Telecaster extensively on stage throughout these famous shows, and later took it into the studio during sessions for Blonde on Blonde, regarded by many as the greatest album ever recorded.

Robertson and the Hawks soon grew into the Band, one of the most revered groups in American music history, and the guitar continued on its remarkable journey.

It can be heard on the recordings of Dylan’s The Basement Tapes, the Band’s debut album Music From Big Pink and their eponymous follow-up: three seminal records which remain classics to this day.

On stage, Robertson played the guitar during some of the Band’s most famous performances, including Woodstock, the Isle of Wight Festival, Festival Express, and Watkins Glen, along with their four–night stand at New York’s Academy of Music in December 1971 (which saw Dylan join them on stage and strap on the Telecaster once again).

The guitar has remained in Robbie Robertson’s personal collection for more than 50 years, during which time it was also played by iconic musicians such as Eric Clapton and George Harrison.

Having been modified and stripped back to original wood, “to give it a new life, along with a different creative surge”, Robertson will now pass the much-storied instrument to a new owner (in return for a presumably huge chunk of cash).

“To witness Robbie Robertson’s legendary electric guitar come to auction is a once in a lifetime event,” said Darren Julien, president and CEO of Julien’s Auctions.

“This special Telecaster has been played not only by Robertson but by Dylan, Clapton, Harrison and was centre stage in the 20th century’s most important music and is arguably one of the most legendary instruments of all time.”