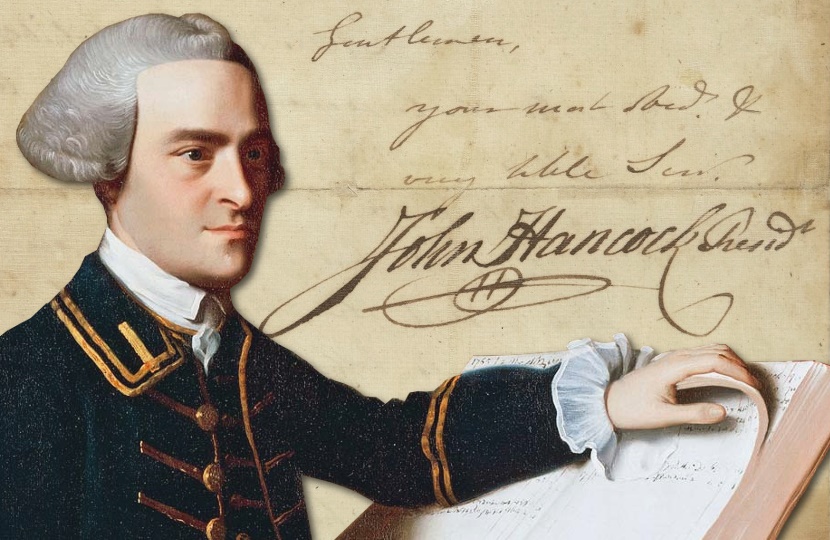 A letter by John Hancock announcing the Declaration of Independence will lead an auction of manuscripts and Americana at Sotheby’s this month.

The historic letter, dated July 6, 1776, was one of several sent out to the original 13 colonies along with a freshly printed copy of the new Declaration.

The letter is amongst the most significant documents by one of the Founding Fathers to appear on the market in recent years.

As one of only five surviving copies bearing Hancock’s iconic signature, it will now cross the block at Sotheby’s in New York on January 27 with an estimate of $600,000 – $800,000.

“As a statement of principle by one of the fifty-six Signers who pledged to each other their lives, fortunes, and sacred honor, this John Hancock letter and its few surviving companions stand sole and incomparable,” said Sotheby’s.

The origins and history of John Hancock’s letter are closely tied to that of the Declaration itself.

In June 1776, following Virginia delegate Richard Henry Lee’s resolution “that these United Colonies are, and of right, ought to be, free and independent States”, Thomas Jefferson was called upon to write the Declaration of Independence.

He intended the document to be “an expression of the American mind”, and on July 4, 1776, the Continental Congress agreed to adopt the Declaration and authorized its printing.

That same night a manuscript copy was taken to Philadelphia print shop of John Dunlap, who set the document in type and printed between 500 and 1,000 copies which were delivered back to Congress the following day.

The first copies of the Declaration to be distributed were those sent out to the 13 original colonies, each accompanied by a letter from John Hancock as President of Congress.

In the letters he explained the new document and its implications for the future of the fledgling nation, writing:

“Altho it is not possible to foresee the Consequence of Human Actions, yet it is nevertheless a Duty we owe ourselves and Posterity in all our public Counsels, to decide in the best Manner we are able, and to trust the result to that Being, who controuls both Causes and Events, so as to bring about his own Determinations.

“Congress have judged it necessary to dissolve all Connection between Great Britain, and the American Colonies; and to declare them free and independent States, as you will perceive by the enclosed Declaration, which I am directed by Congress to transmit to you, and to request you will have it proclaimed in the Way you shall think most proper.

“The important Consequences to the American States from this Declaration of Independence, considered as the Ground and Foundation of a future Government, will naturally suggest the Propriety of proclaiming it in such a Manner that People may be universally informed of it.”

Of those original 13 letters, just four were known to have survived until now, with one example privately owned and the others in the collections of historical societies and museum libraries.

The Hancock letter now offered at Sotheby’s is the fifth to be discovered, and is believed to be the copy sent to one of four colonies: Georgia, North Carolina, South Carolina, or Virginia.

However, due to the chaotic nature of record keeping in the 18th century, the letter was evidently not retained in any official state archive.

Its history is unknown until 1899, when it was auctioned as part of the collection of Col. Thomas Donaldson, and in 1937 it was listed as being owned by the prominent New York dealer Harry F. Marks.

The letter will now be offered publically for the first time in over a century, 224 years after it helped change the course of world history.