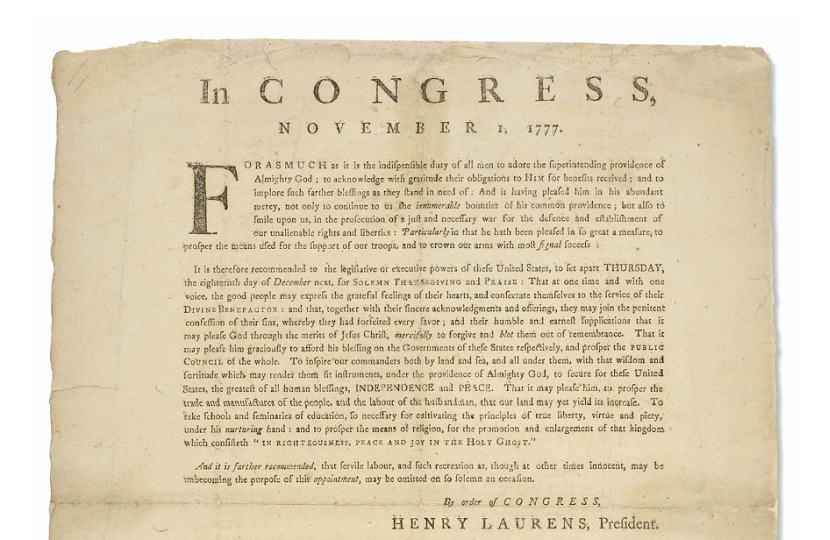 A historic document which helped establish America’s first national Thanksgiving will be offered for at auction at Christie’s next week.

The broadside was printed in 1777, as a recommendation to congress that the United States should observe a national day “solemn thanksgiving and praise.”

Just three original copies of the broadside are known to exist, and the last recorded time a copy appeared at auction was back in 1922.

The notion of Thanksgiving in America stemmed from celebrations that first began with the pilgrims, following their first harvest back in 1621.

These days of prayer and feasting took place occasionally for the next 150 years to celebrate everything from the end of a drought to a victory in battle.

However, it wasn’t until 1777 that the The First National Proclamation of Thanksgiving was given by the Continental Congress during the American Revolutionary War.

George Washington proclaimed the day to be victory celebration for the defeat of the British at Saratoga on October 7, one of the most significant moments of the war.

The text of the broadside was written by Founding Father Samuel Adams, and stated:

“It is therefore recommended to the legislative or executive Powers of these United States to set apart Thursday, the eighteenth Day of December next, for Solemn Thanksgiving and Praise: That at one Time and with one Voice, the good People may express the grateful Feelings of their Hearts, and consecrate themselves to the Service of their Divine Benefactor…”

The broadside also recommended that “servile Labor, and such Recreation, as, though at other Times innocent, may be unbecoming the Purpose of this Appointment, be omitted on so solemn an Occasion.”

The first national day of Thanksgiving in the United States was declared on December 18, 1777, although it was a far more solemn religious remembrance than today, at a time when the nation was still fighting for its freedom.

National days of Thanksgiving were then celebrated intermittently by Presidents for the next century, and the tradition grew into an annual event in several states across the U.S.

But it wasn’t until 1863 that Abraham Lincoln established the annual national Thanksgiving day as it it known today, and it finally became a national holiday in 1885. 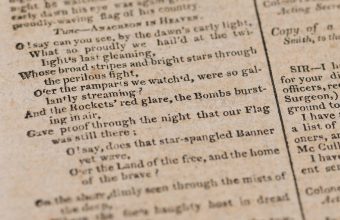 Oldest newspaper printing of The Star Spangled Banner up for auction