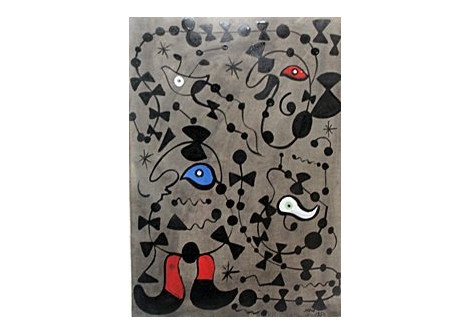 The work is signed by the artist and dates to 1950.

It’s accompanied by a certificate from the Joan Miro Foundation.

Miro returned to Spain from Paris in 1940, after the German invasion. He spent the rest of the war in Majorca.

During this time he became a major influence on the abstract expressionists.

The present lot was created in the aftermath of the war and is one of a series of works on paper executed in his late style – a combination of wild abandon and careful control.

Miro’s market is exceptionally buoyant at present, with collectors entranced by his delicate and idiosyncratic work.

Leger was a leading cubist whose work was inspired in part by his experiences in the first world war. The mechanics of war can be seen in his trademark, tube-like forms. &nbsp;

The present work was completed in 1933, around the time he completed Two Sisters – considered one of his masterpieces.

His work became more organic and less machinelike after the 1920s, as see here.