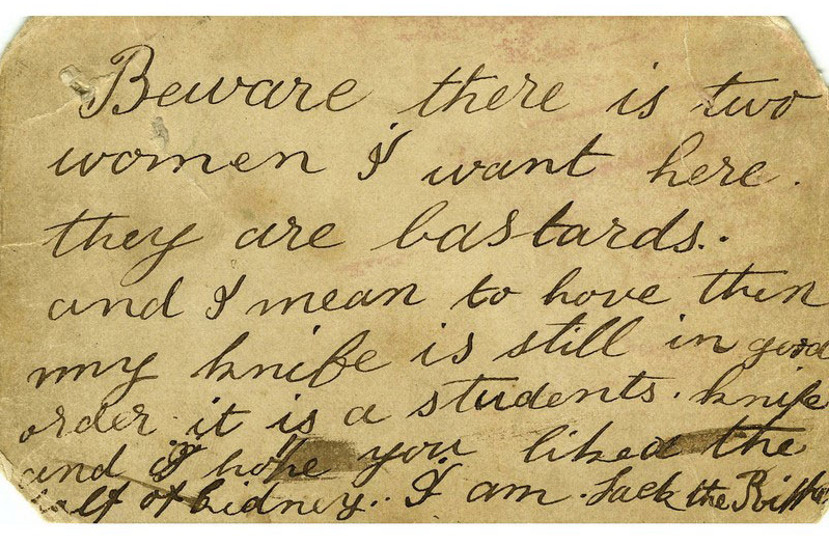 A postcard purportedly written by Jack the Ripper has sold for £22,000 ($30,267) at Grand Auctions in Folkestone, UK.
That’s a spectacular increase on the £900 ($1,238) estimate. However, there’s a good chance that the Ripper may never have written it.

The card was handed in to Ealing Police Station in London in 1888. The inscription reads (sic): “Beware there is two women I want here they are bastards, and I mean to have them my knife is still in good order it is a students knife and I hope you liked the half of kidney. I am Jack the Ripper.”

While this may have been a sinister message from the Ripper, the chances are that it was written by a disturbed copycat eager for a piece of the limelight or (more likely) a journalist. A large number of these cards were left at police stations across London as the Ripper stalked the city between 1888 and 1891.

The piece was auctioned from the collection of a former Metropolitan Police Officer, John Hall, who received the card as a gift on his retirement in 1966. While we will never know whether the Ripper wrote this message, it is the first item connected with the investigation ever to be sold publicly.

Auctioneer Jonathan Riley explains: “Nothing like this from the police files has ever come up for sale before with such convincing provenance, so we are dealing with a very rare artefact indeed involving someone who still casts a chilling shadow even after all these years…

"It continues to grip the public’s imagination and the story is never very far from the news headlines, with books, films and TV programmes all dedicated to the subject.”

Letters like these are the reason for Jack the Ripper’s infamy, although some of the more famous ones (the so-called Dear Boss and Saucy Jacky letters, which first introduced the name) were apparently written by journalists. They were published in newspapers to sensational effect.