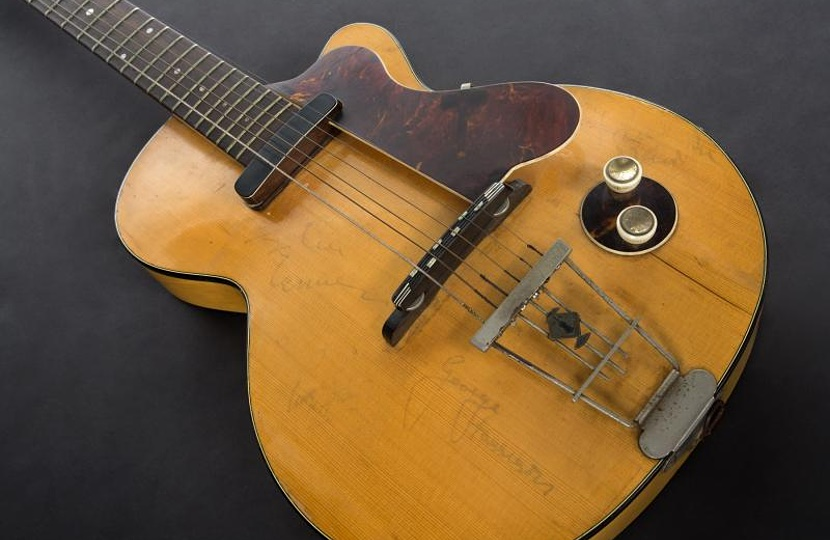 The first electric guitar ever owned by Beatles legend George Harrison will be offered for sale in New York later this month.
Harrison owned the Hofner Club 40 when he was just 16, as the band (still known as the Quarrymen) began playing their earliest gigs at the Casbah Coffee Club in Liverpool.

Years later it was given away as a prize in a German ‘Battle of the Bands’ competition, and has remained in the same private collection for more than 50 years.

The historic instrument is now expected to sell for $200,000-300,000 when it crosses the block at Julien’s Auctions on May 19, as part of the company’s hotly anticipated Music Icons sale.

George Harrison originally met Paul McCartney on the top deck of a school bus, and the pair bonded over their shared love of music. Harrison then impressed John Lennon with his guitar skills, and began sitting in with the group before earning his spot as a full-time member.

As the success of The Beatles grew throughout the early 1960s, so did Harrison’s guitar collection, but unlike many other instruments he kept hold of the Hofner Club 40 as the band honed their skills in Hamburg nightclubs.

One of those nightclubs was the Star Club, and in 1965 they approached the group for a signed guitar, to be given away as first prize in a competition to discover Germany’s Best Beat Band of 1966.

By now the Beatles were the biggest band in the world, but they still remembered their roots, and manager Brian Epstein was happy to oblige.

He managed to convince Harrison to donate his Hofner Club 40, and a delegation of fans and Star Club officials collected the guitar following a show at the Hammersmith Odeon on December 8, 1965.

The winners of the Star Club competition was the band Faces, and the guitar was presented to their lead singer and guitarist Frank Dostal, who kept it proudly in his private collection for the rest of his life.

Dostal passed away in 2017, and now his treasured guitar will be offered for sale for the first time by his widow Mary Dostal, a former member of the Liverpool girl group the Liverbirds.

The instrument has been examined by leading Beatles autograph expert Frank Caiazzo, who determined that the Fab Four’s signatures had actually all been signed by their road manager Mal Evans.

The autographs may have been fake, but the instrument itself is the real deal – a valuable piece of George Harrison’s musical journey from teenage teddy boy to one of the 20th century’s most significant music heroes.

Today collectors will happily pay six or seven-figure sums to own genuine Beatles-owned instruments, which played a part in shaping the history of popular music.

And in 2015, a Gibson J-160E electric/acoustic guitar originally used by John Lennon to compose many of the Beatles’ biggest hits sold at Julien’s for $2.4 million – making it the world’s most valuable piece of Beatles memorabilia.