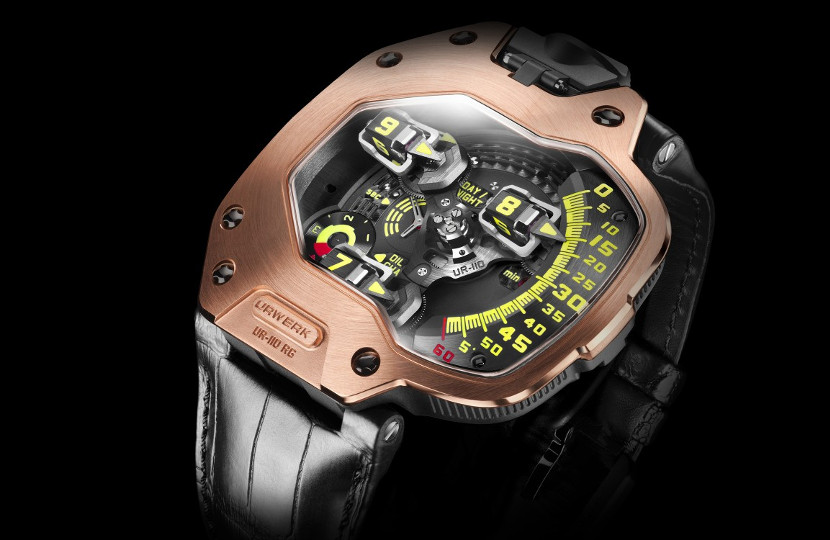 The Urwerk UR-110RG watch worn by Robert Downey Jr as Iron Man in Marvel movie Spider-Man: Homecoming is up for auction.
The piece will be offered at Phillips Geneva on May 12-13, with the proceeds to go to Manusodany – a charity that funds development projects in Haiti.

The watch was suggested for the character by Downey Jr himself, who has been a passionate Urwerk fan for some time. The studio commissioned a special version with a rose gold bezel that would pair with the character’s suit. It’s one of only two in the world (Downey was gifted the other).

“It’s just one of those unexpected stories that make life such a thrill,” said Urwerk CEO, Felix Baumgartner. “With my team, we often give our watches nicknames. Blade Runner and Godzilla are both names we use internally for some of our watches but nothing really stuck to the UR-110 until we received this unbelievable proposition.

“Our UR-110 on the wrist of Tony Stark! A character that is eccentric and passionate about science, and totally cool. That’s exactly the kind of person we wanted for this watch, but he’s the one who found us!”

Founded in the late 1990s, the company has been one of the most innovative Swiss makers of recent times. The UR-110RG is a hugely technical watch, that’s nevertheless grounded in tradition. It features a fascinating rework of the wandering hours complication, first invented by the Campani brothers in Italy in 1656.

This unusual feature sees the hours set on a rotating disc, which passes by a static block of minutes.

There’s no estimate, but another Urwerk UR-110RG sold for $53,225 at Sotheby’s in 2015. This specimen is likely to sell for considerably more given its onscreen role.