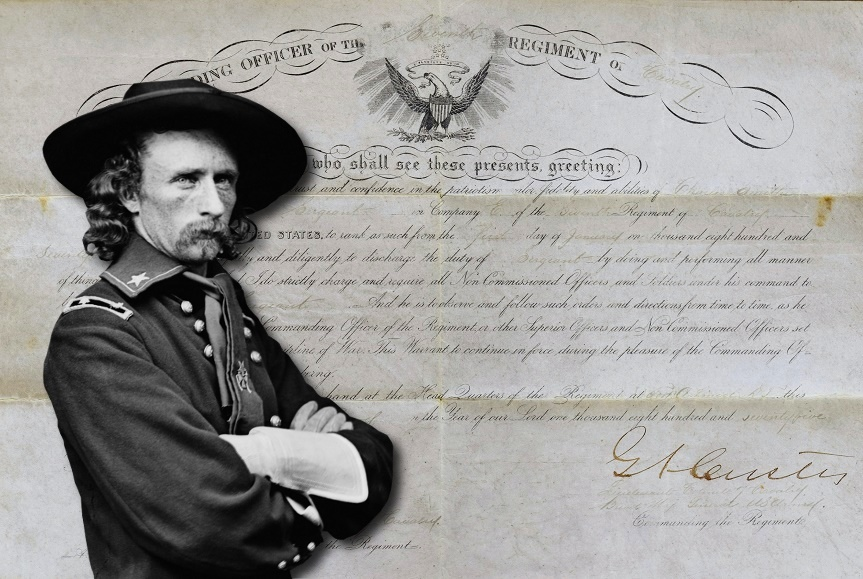 From Babe Ruth to the Battle of Little Bighorn – the current sale at One of a Kind Collectibles features a treasure trove of historic Americana.
The online auction, which runs until December 7, is led by a rare military document signed by General George Armstrong Custer.

The document, dated February 11, 1875, is a commission appointing Charles F. Smith to the position of sergeant in the 7th Cavalry Regiment.

According to the auction house, it is one of just four other 7th Cavalry commissions offered at auction in the past 40 years.

Smith served alongside Custer for around 16 months, before both were killed in the infamous Battle of Little Bighorn in 1876.

The battle, more famously known as Custer’s Last Stand, saw the General lead the 7th Cavalry in an attack on a Native American village – resulting in a famous victory for Lakota, Northern Cheyenne, and Arapaho tribes.

The document also bears the signature of Lieutenant Willaim Winer Cooke, who was responsible for writing the famous ‘last message’ sent before the battle.

The rare and historically important Custer document is part of an archive relating to the military career of Smith, and is expected to sell for $15,000 – $20,000.

Another standout lot is a document signed by President Abraham Lincoln to George Harrington, the man who would eventually plan his funeral.

The document appointed Harrington, Assistant Secretary of the Treasury, to discharge the duties of the Secretary Wm. P. Fessenden in his absence.

It was signed by the President on October 17, 1864, and six months later Harrington found himself with just four days to organize a state funeral, after Lincoln was assassinated by John Wilkes Booth.

Harrington himself served as the Grand Marshal of the funeral procession, and later received a personal letter of thanks from Lincoln’s widow for his efforts.

Further notable items from American history a baseball beautifully signed by New York Yankees legend and cultural icon Babe Ruth; a set of handwritten lyrics to the anthem "America the Beautiful" signed by songwriter Katharine Lee Bates; a manuscript signed by the polymath and Founding father Benjamin Franklin; and a document signed by the 1st American President George Washington.

Check out the full auction here.