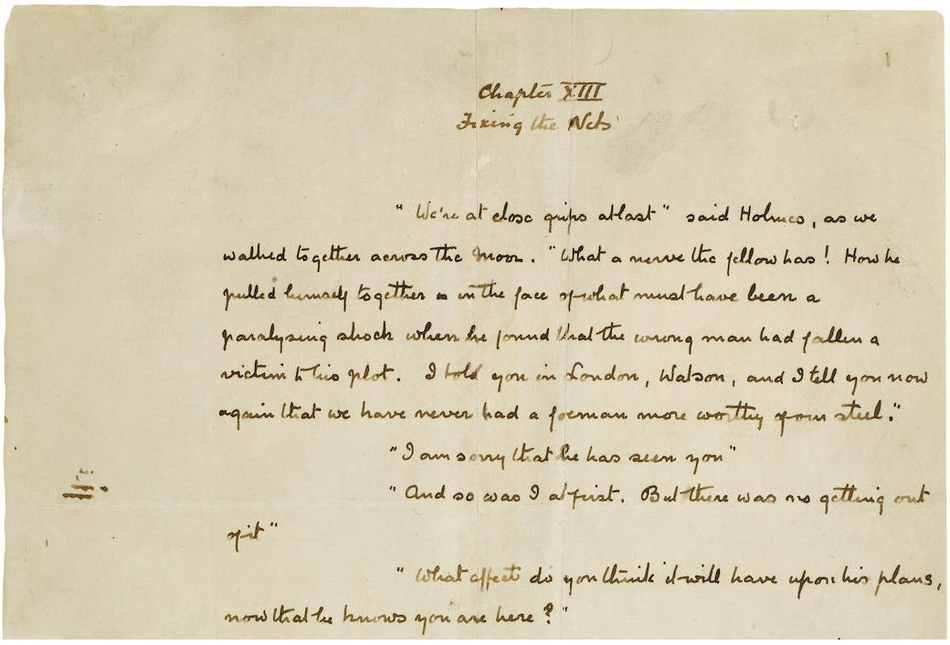 A single page from an original Sherlock Homes manuscript could sell for more than $100,000 at auction later this month.
The Bonhams Fine Literature Sale in New York will offer a page from Arthur Conan Doyle’s handwritten manuscript for the classic story The Hound of the Baskervilles, estimated at $100,000-$150,000.

Originally serialized in The Strand in 1901, The Hound of the Baskervilles is perhaps the most famous Sherlock Holmes mystery ever written.

It marked the return of the world’s greatest detective after eight years away, following his apparent death in The Final Problem, published in 1893, which saw him plummet over the Reichenbach Falls with his arch nemesis Moriarty.

The story was published in novel form in 1902, and to promote the U.S release McClure, Phillips & Co. came up with a unique marketing ploy. They convinced Arthur Conan Doyle to send them his original handwritten manuscript, and distributed single pages to bookstore owners across America to be displayed in their windows.

Most of these pages were lost or destroyed, leaving just a handful of survivors: the complete Chapter XI, ‘The Man on the Tor’, and 36 further individual pages. The majority of these are now owned by institutional collections, including the full chapter which is part of the Berg Collection at The New York Public Library.

The page on offer at Bonhams features a discussion of the case between Holmes and Watson, including the lines:

_"…There’s the devilish cunning of it! If he were acting through a human agent we could get some evidence, but if we were to drag this great dog to the light of day it would not help us in putting a rope round the neck of its master."_

_"Not a shadow of one–only surmise and conjecture. We should be laughed out of court if we came with such a story and such evidence."_

This dialogue is relatively rare in the story, as Holmes does not appear in two-thirds of the novel, making the page highly desirable for collectors.