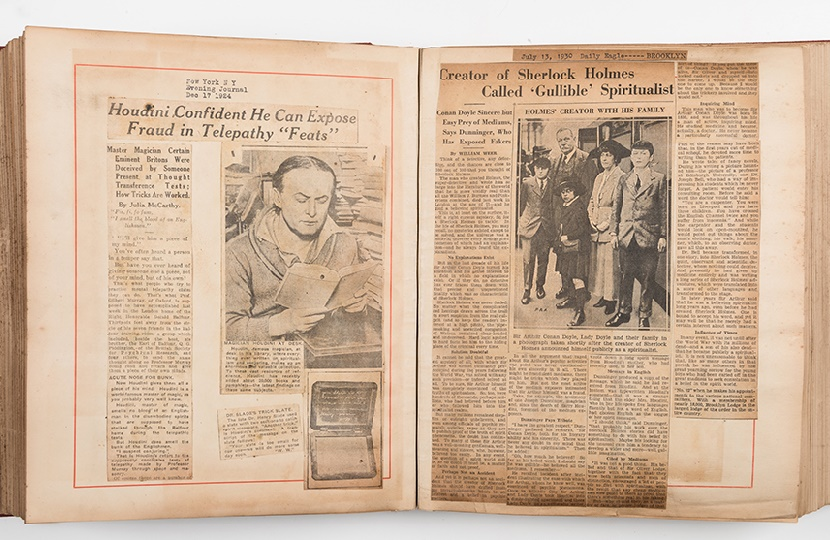 A remarkable scrapbook kept by the legendary magician Harry Houdini could fetch more than $30,000 when it comes up for auction later this month.
The two-volume book contains hundreds of newspaper and magazine clippings covering Houdini’s obsession with fake mediums and spiritualists, to which he devoted the final years of his life.

The scrapbook will cross the block on April 28 at Potter Potter, a Chicago-based auction house specialising in historic magic memorabilia.

Houdini first encountered the world of spiritualism at the age of 18, as he sought solace following the death of his father in 1892. But instead of a comforting message from beyond, all he found was disappointment – which soon turned to anger.

Many of the ‘mediums’ were obvious frauds and he became determined to unmask them, to prevent more grief-stricken people from being conned out of their money.

During the early 20th century Houdini’s career as a magician and escapologist saw him become one of the world’s most famous men – but during his later years he returned his attention to fake spiritualists.

Throughout the 1920s Houdini made it his mission to debunk many of the world’s most famous spirit mediums, using his own knowledge of magic and stagecraft.

He would often attend séances in disguise, then rise up to cry "Fake!" with a police officer and a reporter in attendance.

Houdini was also a member of a Scientific American committee that offered a cash prize to any medium who could successfully demonstrate supernatural abilities. Unsurprisingly, the prize was never collected.

The first volume of the scrapbook contains cuttings spanning from 1922 through to 1925, covering stories of debunked spiritualists from around the world – including those uncovered by Houdini himself.

The second volume of the book is almost entirely focused on Houdini’s former friend, the celebrated author and creator of Sherlock Holmes, Sir Arthur Conan Doyle.

The pair had corresponded for years before finally meeting in 1920, as they shared their fascination with spiritualism. But whereas Houdini was the ultimate skeptic, Conan Doyle was a true believer whose wife Jean was herself a practising medium.

Conan Doyle became convinced that Houdini was himself a powerful psychic, who was using his supernatural powers to ‘block’ others and get rid of the competition.

Despite Houdini’s attempts to convince him otherwise, including demonstrating the techniques used in his own stage show, Conan Doyle refused to believe him and the pair had a bitter falling out.

The scrapbook features clippings from 1922, as Houdini followed Conan Doyle’s public defence of several mediums, psychics and spirit photographers who were later exposed as frauds. This second volume also features a number of handwritten annotations, and is signed three times by Houdini.

Following Houdini’s death in 1926, the scrapbook was inherited by Joseph Dunninger, a fellow magician and spirit debunker who continued his work into the 1930s.

Having remained in Dunninger’s family ever since, the scrapbook will now be offered at auction for the first time, with an estimate of $30,000 – $40,000.