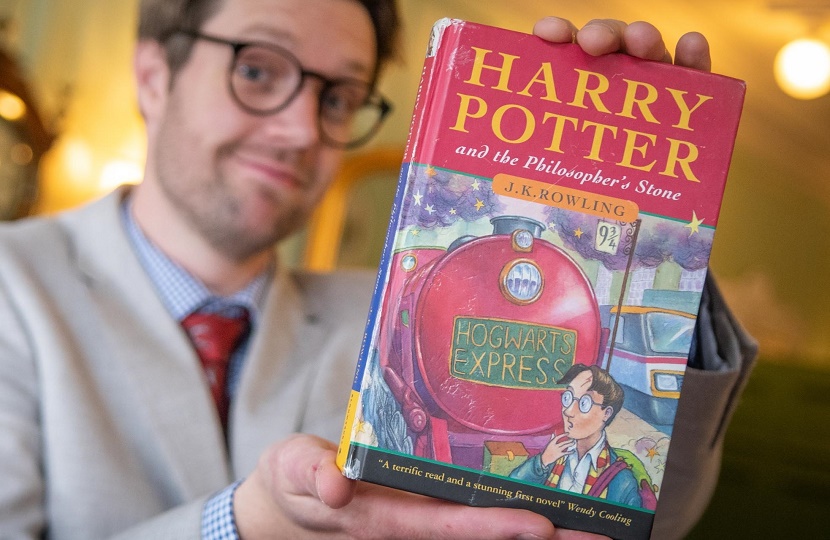 A rare Harry Potter book bought for just £1 sold for more than £30,000 during a sale at Hanson’s Auctions in the U.K this week.

The first edition copy of Harry Potter and the Philosopher’s Stone had spent more than 20 years hidden in a cupboard, before it was recently discovered during a routine valuation visit.

“I found the book when I was called to a client’s house near Stafford to value three boxes of books,” said Hanson’s book expert Jim Spencer.

“There it was – the holy grail of Harry Potter books. I was so excited. Every book valuer dreams of finding one of these.

“I was slightly caught in disbelief when I first saw it. I receive calls every week from people saying they have a first edition Harry Potter.

“In fact, when news of this discovery broke, I was receiving 50 emails a day.  But most copies can invariably be ruled out in seconds.”

True first edition copies of the book include two typographical errors: a list on page 53 includes the item “1 wand” twice, and the word philosopher’s is misspelt “philospher’s” on the back page.

The book marked the first volume in the biggest-selling series in history, and the start of a multi-billion dollar empire of movies, theme parks and merchandise.

But back in 1997 J.K Rowling was an unknown author making her debut, and just 500 first edition copies were printed by publisher Bloomsbury.

Of those, 200 copies were sold through book stores and the rest were ordered by schools and libraries around the U.K.

The book offered at Hanson’s was one of those copies, and retained its original Staffordshire Library label marked with the stamp “Withdrawn from stock”.

The consignor had originally paid £1 for the book at a table top sale, amongst a stack of second-hand books he bought to read on holiday.

“I can’t believe it. It’s what I’d hoped for but I never really believed my book would make that price,” he said following the auction.

“I knew another Harry Potter first edition had sold for £28,000 but I was panicking as there had been no bids prior to the sale. When I checked to see if it had sold, I was amazed.”