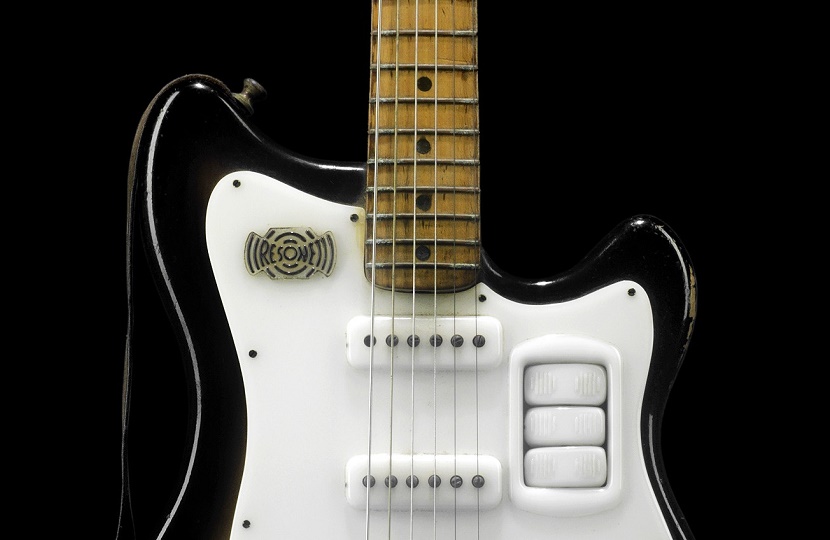 A guitar played by George Harrison during the Beatles' early days in Hamburg is heading for auction at Bonhams (Image: Bonhams)

A guitar played by George Harrison during The Beatles’ early days in Hamburg is heading for auction at Bonhams later this year.

The guitar will be offered for sale for the very first time, having remained hidden in a private collection for 55 years.

George Harrison originally bought the guitar at Hessy’s music shop in Liverpool in November 1959, and recalled the moment in the Beatles ‘Anthology’ book:

“Paul came with me when I bought the Futurama.  It was on the wall with all the other guitars, and Paul plugged it into the amp but he couldn’t get any sound out of it, so he turned the sound right up.  The guitar had three rocker switches, and I just hit one and there was an almighty boom through the amplifier, and all the other guitars fell off the wall.”

As Harrison was still only 16 at the time, his mother had to sign the purchase agreement for him, and records show the account was later paid off by Brian Epstein when he became the band’s manager.

In August 1960 Harrison took the guitar with him to Germany, as The Beatles embarked on an 18-month adventure in the port of Hamburg.

It was there, in venues like the Indra Club, the Kaiserkeller, the Top Ten Club and the Star Club, that The Beatles cut their teeth as a working band, playing for hours on end to drunken crowds of sailors, gangsters and prostitutes.

John Lennon later said “I might have been born in Liverpool – but I grew up in Hamburg”, and Harrison himself said “I’d have to say with hindsight that Hamburg bordered on the best of Beatles times.”

Lennon, McCartney and Starr, along with original members Pete Best and Stuart Sutcliffe, were photographed during the period by Sutcliffe’s German girlfriend Astrid Kirchherr, who heavily influenced the band’s developing style.

In several of Kirchherr’s photographs Harrison can be seen dressed in his black leather jacket and clutching the same Futurama guitar now headed for sale with Bonhams. (In 2012 Bonhams also sold Harrison’s leather jacket from the period, for $143,670.)

Eventually Harrison was deported back to England for being underage, but by the time the whole band returned to Liverpool in December 1962 they were a well-oiled rock and roll machine – and ready to take on the world.

Harrison quickly upgraded another guitar, later describing the Futurama as “a dog to play”, and in 1964 he gave it to Beat Instrumental Magazine to offer as a competition prize.

However, the winner of the competition chose to receive a cash prize rather than the guitar, and it remained in the collection of the magazine’s publisher Sean O’Mahoney, who also published the official Beatles Monthly fan magazine.

More than half a century on, the guitar has now been consigned by one of O’Mahoney’s relatives and is completely fresh to the market.

“It is both rare and exciting to see a Beatles’ guitar of this nature come onto the market,” said Bonhams Entertainment Memorabilia specialist, Claire Tole-Moir.

“George Harrison is one of the biggest names in Rock and Roll history, and we are privileged to be handling such a special guitar that dates from an early period in the Beatles’ history, when the band were learning their craft and developing their sound that was soon to sweep the world.

“It has been treasured for so many years and comes to auction for the very first time. I anticipate huge interest from collectors.”

Given its provenance, its historic importance and its appearance in numerous iconic photographs, it would be no surprise to see Harrison’s Hamburg Futurama achieve a similar high six-figure sum. 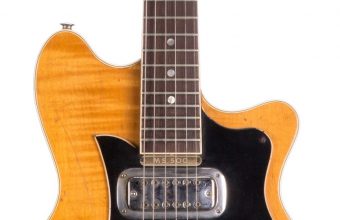 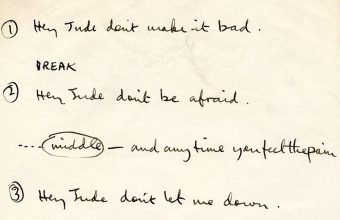