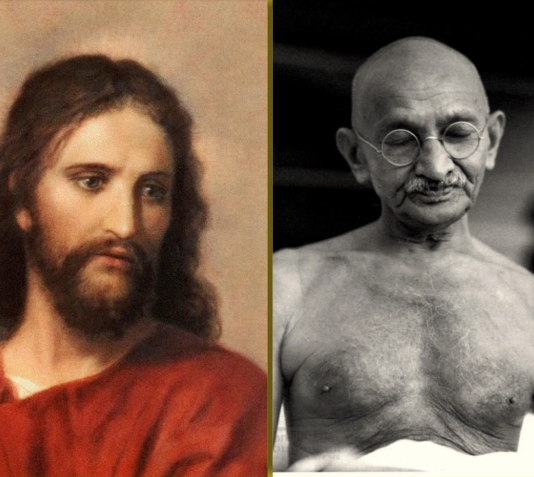 A letter written by Gandhi in which he praises Jesus has sold for $50,000 in the US.
The typed letter, which bears Gandhi’s signature at the bottom, changed hands at the Raab Collection.

Gandhi writes that Jesus was a superb teacher, but that he doesn’t view him as a deity.

“Dear Friend, I have your letter. I am afraid it is not possible for me to subscribe to the creed you have sent me,” Gandhi replies to Milton Newberry Frantz.

The US religious elder had suggested Gandhi read an article about Christianity that Frantz had written.

“The subscriber is made to believe that the highest manifestation of the unseen reality was Jesus Christ. In spite of all my efforts, I have not been able to feel the truth of that statement,” Gandhi continues.

"I have not been able to move beyond the belief that Jesus was one of the great teachers of mankind.”

While Gandhi was a Hindu, he is known to have studied the story of Jesus’ life intently, and was particularly impressed by the Sermon on the Mount.

The Raab Collection, which has held the piece for decades, believes it is the only Gandhi letter that mentions Jesus – a fact that will have enhanced its appeal, and value.

It is the second big sale of a Gandhi signed item this week. A Gandhi signed photo sold for $41,806 at RR Auction on March 7, smashing its $10,000 pre-sale valuation.

The two sales suggest a re-evaluation of Gandhi’s worth on the memorabilia market is needed, as prices for Gandhi handwritten letters and signed photos have rarely surpassed $10,000 previously.

India’s growing middle and upper classes have noticeably been repatriating the country’s heritage in recent years. This has included Gandhi artefacts such as the spinning wheel he employed during his Quit India protests. It auctioned for £110,000 ($154,775) in 2013.