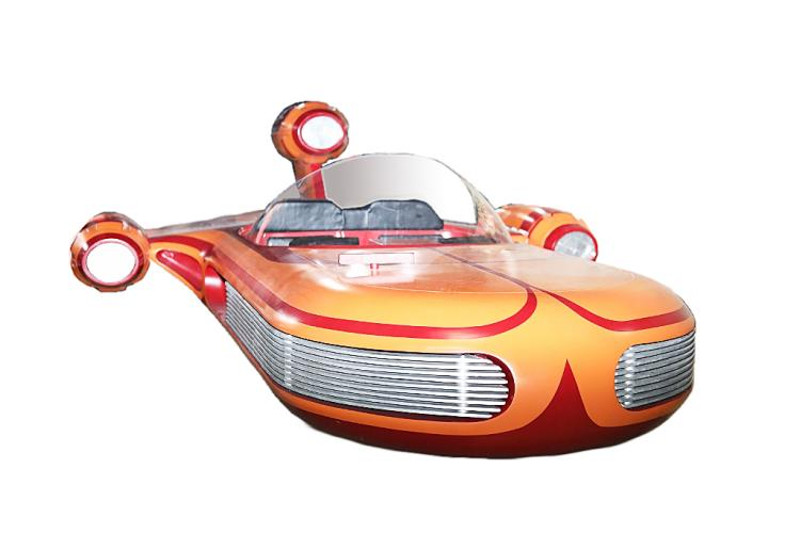 A full size working replica of the X-34 Landspeeder from Star Wars Episode IV: A New Hope (1977) is up for sale at GWS Auctions in LA on March 24.
Bidding starts at $2,500, with an estimate of up to $95,000. That huge valuation reflects the level of detail this model displays.

The nostalgic ride was formerly on display at the Celebrity Car Museum in Branson, Missouri. It’s one of two the attraction commissioned from specialist Scotlea Hot Rods;<span data-mce-style="mso-spacerun: yes;"> one battle scarred, the other factory fresh.

This specimen is the latter. Unlike the onscreen version, it doesn’t hover. It’s actually made from fibreglass fixed to a golf cart motor which, as the auction house notes, will make getting hold of new parts pretty straightforward. It’s certainly much easier than a lengthy trip to Tattooine.

That’s not it for replicas from much-loved franchises. A model Batmobile from the wildly popular 1960s Batman TV series (starring Adam West) is also offered, with a valuation of $200,000-250,000.

The lot is also consigned from the Celebrity Car Museum. It was built in Canada, using the original moulds from the car seen in the show. The base is a 1976 Lincoln.

An electric ride on train from Michael Jackson’s Neverland ranch will also feature. The lot was made by German firm Elektro-Mobiltechnik in 2001 and acquired by Jackson some time after, likely around 2007-2008. It’s the smaller of two trains the star had installed at the estate and is expected to make around $65,000-70,000.