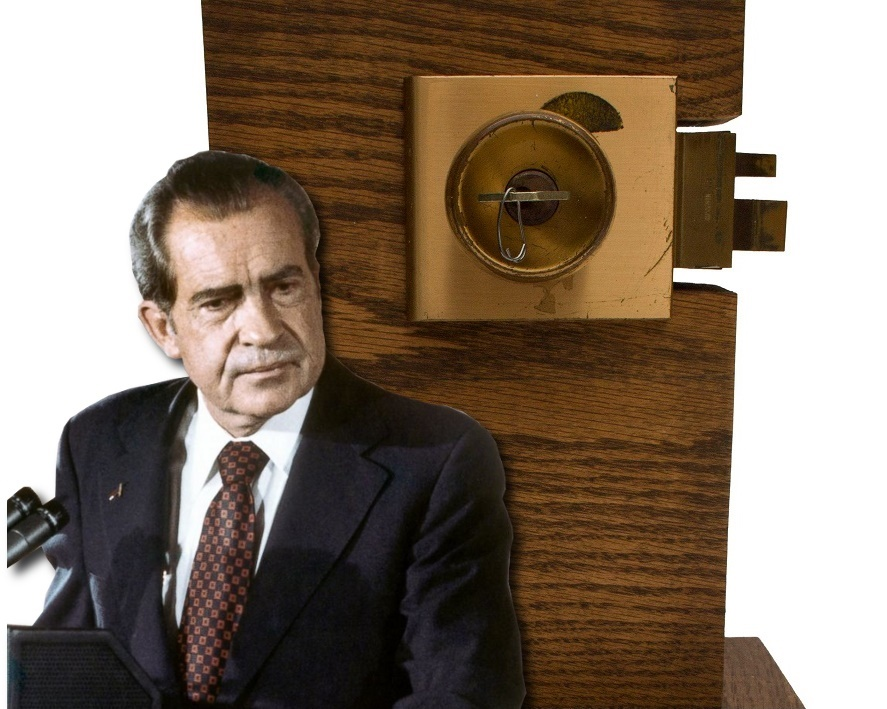 It may look like a simple door lock.
But it’s actually a vital piece of history from ‘Watergate’, one of the darkest moments in American political history.

That simple lock, which helped bring down a President, could now fetch more than $50,000, when it hits the auction block at Nate D. Sanders on December 14.

The Watergate scandal remains America’s biggest political scandal to date; a tale of corruption that shook the fundamental beliefs of people across the nation.

In the early hours of June 17, 1972, five men broke into the Democratic National Committee’s headquarters at the Watergate Complex in Washington D.C.

A security guard at the complex called the police, after he spotted door latches had been taped open, and that a stairwell lock leading to the offices had been jimmied.

The five men were caught and convicted of stealing documents and tapping the DNC’s phone lines. And then all hell broke loose.

An intense investigation, which involved Washington Post reporters Bob Woodward and Carl Bernstein, uncovered a political conspiracy that led all the way to the President.

The five men had been working for White House officials, as part of the campaign to re-elect Richard Nixon in 1972.

And when Nixon found out about the burglary, he attempted to cover up the crime by paying them hush money, and ordered the CIA to block the FBI’s investigation.

This amounted to a deliberate obstruction of justice, and a huge misuse of presidential powers.

Facing certain impeachment, and a possible criminal conviction, he resigned from the White House in disgrace in August 1974. A further 48 members of the Nixon administration were also later found guilty of corruption.

This lock is the very same one jimmied during the infamous burglary, to gain access to the DNC offices at Suite 600, 2600 Virginia Avenue.

The day after the break-in it was replaced by locksmith James Rednowers, who kept it for several years in a junk box before gifting it to Jim Herrald, the retired superintendent of the Watergate complex.

Herrald sold the lock to a private collector for an undisclosed sum in 1997 – and now 20 years later, in the midst of another Washington conspiracy investigation, it’s back on the open market once more.