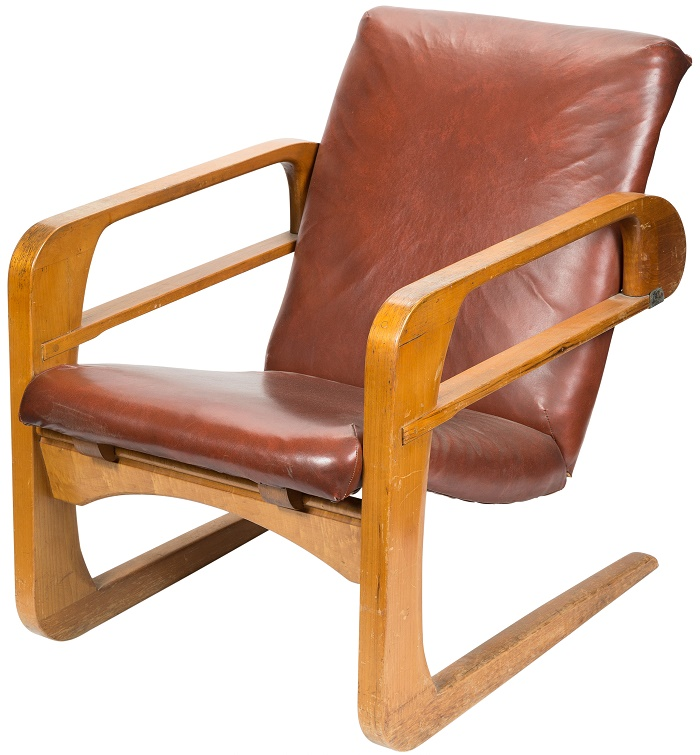 An original animator’s chair and desk used at Walt Disney Studios in the 1940s are heading for sale in Beverly Hills next week.
The historic pieces of furniture will cross the block at Heritage Auctions on December 9-10, as part of a sale of comic and animation art.

Both items were created by Kem Weber, the architect responsible for the Walt Disney Studios complex in Burbank, California.

Following the success of his landmark animated feature Snow White and the Seven Dwarfs, Walt Disney used the profits to build a new studio in Burbank, California.

He was determined to create a state-of-the-art facility for his animators, and Weber’s streamlined Art Deco style perfectly matched Disney’s vision for the future.

Weber originally designed the Airline Chair in the mid-30s, and offered it to a number of manufacturers – all of whom turned it down, citing a poor consumer market in the midst of the economic depression.

He eventually established his own company to manufacture them, but only produced around 300 examples, the vast majority of which were used at Walt Disney Studios.

Today the Kem Weber Airline Chair is a regarded as an iconic piece of design history, and examples can be found in museums around the world including the V&A in London.

This example, used at the world’s most famous film studio during the ‘Golden Age’ of animation, is now expected to sell for more than $15,000.

The second item up for sale at Heritage is an original Weber-designed animator’s desk, circa 1939-1940, which was also in place the day the studio opened in 1940.

The desk comes complete with its original bulletin board for model sheets, mirrors, and even a place for animators to place their cigarettes while they worked.

Also included with the desk is the pencil tray once owned by Eric Larson, a legendary animator and one of the famous ‘Nine Old Men’ around whom Walt Disney originally built his studio.

Larson was the company’s longest-serving animator, and throughout his 53-year career worked on films such as Snow White and the Seven Dwarfs, Pinocchio, Fantasia, Bambi, Cinderella and The Jungle Book.

The desk and pencil tray come from the personal collection of longtime Disney Studio Supervising Animator David Pruiksma, and is estimated at $5,000+.