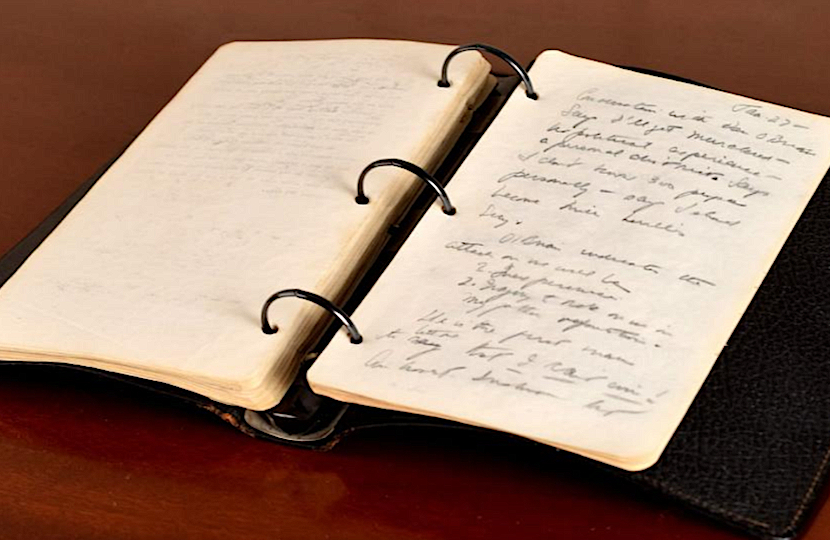 John F. Kennedy’s personal diary from the summer of 1945 is up for sale at RR Auction this week, where it could fetch upwards of $750,000.

The diary spent decades under the ownership of Deidre Henderson, Kennedy’s research assistant during his years in the Senate.

The diary, which features handwritten and typed entries, was the only diary Kennedy kept throughout his life.

Following his discharge from the Navy, the 28-year-old Kennedy spent several months working as a reporter in Europe, where he witnessed first-hand the devastating aftermath of WWII.

During this period he recorded observations on everything from post-war Europe and the birth of the United Nations, to his own wartime service and political aspirations.

According to the renowned TIME Magazine columnist Hugh Sidey, the diary “reveals a man who, not yet thirty, understood not only that a new world drama was taking shape, but that he was destined to play a great role in it.”

Kennedy’s diary is an important record of the period, and his observations regarding political turmoil across Europe are written with the clear head of a historian.

“You can easily understand how that within a few years Hitler will emerge from the hatred that surrounds him now as one of the most significant figures who ever lived,” writes Kennedy, following a visit to the Fuhrer’s burned-out bunker in Berlin.

“[He] had boundless ambition for his country which rendered him a menace to the peace of the world, but he had a mystery about him in the way he lived and in the manner of his death that will live and grow after him. He had in him the stuff of which legends are made.”

Kennedy also writes of visiting Berlin in July 1945, just a few weeks after the end of WWII. During the trip he described the devastation he encountered, from the bombed-out buildings to the desperate civilians he encountered:

“On some of the streets the stench – sweet and sickish from dead bodies – is overwhelming. The people all have completely colorless faces – a yellow tinge with pale tan lips. They are all carrying bundles. Where they are going, no one seems to know. I wonder whether they do.”

“When JFK said that Hitler ‘had in him the stuff of which legends are made,’ he was speaking to the mystery surrounding him, not the evil he demonstrated to the world,” says Henderson.

“Nowhere in this diary, or in any of his writings, is there any indication of sympathy for Nazi crimes or cause.”

Kennedy also had the opportunity to follow his political idol Winston Churchill on the campaign trail in Britain after the war, and praises the Prime Minister for his leadership:

“In the dark days and darker nights, when Britain stood alone – and most men, save Englishmen, despaired of England’s life – he mobilized the English language and sent it into battle. The incandescent quality of his words illuminated the courage of his countrymen.”

The diary will be offered as part of RR Auction’s Remarkable Rarities live auction, which takes place on September 25. 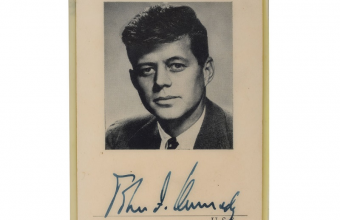